February 26, 2013
When I discovered there was a book coming out about a girl who was a literal Nightmare I was super excited. The Nightmare Affair by Mindee Arnett has a great concept. When I began reading it I was afraid the execution would not quite live up to it. I'm glad I stuck with it though because I thoroughly enjoyed the second two thirds. 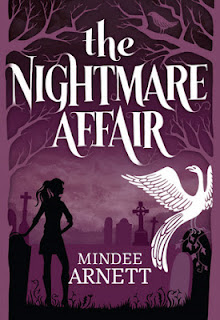 Sixteen-year-old Dusty Everhart breaks into houses late at night, but not because she’s a criminal. No, she’s a Nightmare.
Literally.
Being the only Nightmare at Arkwell Academy, a boarding school for magickind, and living in the shadow of her mother’s infamy, is hard enough. But when Dusty sneaks into Eli Booker’s house, things get a whole lot more complicated. He’s hot, which means sitting on his chest and invading his dreams couldn’t get much more embarrassing. But it does. Eli is dreaming of a murder.
Then Eli’s dream comes true.
Now Dusty has to follow the clues—both within Eli’s dreams and out of them—to stop the killer before more people turn up dead. And before the killer learns what she’s up to and marks her as the next target.

Dusty and Eli are a dream-seer pair, a very rare phenomenon. She is a nightmare who feeds on dreams and when she feeds on Eli's they can see things that are going to happen or that have happened. Which means they have no choice but to work together no matter how either of them feels about it. Dusty is uncomfortable with feeding on Eli and Eli is seriously angry at her for dragging him into this strange world where he doesn't belong. My concern at the beginning of the book was that it was going to have all the elements I hate finding in YA fantasy: boy and girl bound together by a supernatural destiny neither of them can fight=love, boy half of duo being dangerous and sparking feelings of fear, a love triangle, cliche high school politics (exchange mean sirens for mean cheerleaders). I kept reading though because I did love the concept and I couldn't help but like Dusty's snarky yet vulnerable voice. I'm happy to say that most of my concerns were laid to rest as the story unfolded.

Eli is not at all dangerous or a bad boy. At all. He is actually a really nice guy who wants to be a cop and loves mythology and folklore. He sticks up for the little guy and though he is angry at Dusty he never mistreats her. Dusty and Eli are attracted to each other but both are trying to ignore it. He is dating someone else and so is she. Their characters are not as fully realized as I like my characters to be, but I definitely enjoyed them and their story which is full of action, adventure, and mystery. In addition to Dusty and Eli there are several minor characters who I really enjoyed particularly Selene, Dusty's best friend. I love the way Arnett has given a new spin to old folklore and what she has done with the world here. The book is hard to put down and engrossing to the very end.

The book is a fun mystery with a magical flavor. It is lighter in tone than other books of the same genre and I enjoyed that element. I will definitely be back for more as I'm fairly certain this will be a series.

I read an e-galley received via the publisher from NetGalley. The Nightmare Affair is on sale March 5.