April 03, 2013
I love a good fairy tale retelling especially one that adds new twists and is good fun to read. Frogged by Vivian Vande Velde does and is. 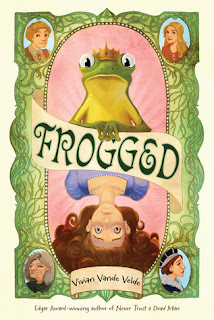 Synopsis (from Goodreads):
One should be able to say of a princess “She was as good as she was beautiful,” according to The Art of Being a Princess (third revised edition), which the almost-thirteen-year-old Princess Imogene is supposed to be reading. Not feeling particularly good, or all that beautiful, she heads for a nearby pond, where, unfortunately, a talking frog tricks her into kissing him. No prince appears, as one might expect. Instead, the princess turns into a frog herself! Thus launches a funny, wonderfully spun fractured fairy tale in which Imogene wonders if she will be forever frogified.

Now if you read the synopsis I know what your thinking: Another retelling of "The Frog Prince" where the girl turns into a frog post kiss. I know. I was thinking it to when I reached that part, but it's different. Trust me. She turns into a frog, but the boy-turned-frog does turn back into a boy. That is the tricky part of this curse. If someone kisses you the curse isn't broken, it passes on to them. Imogene isn't the sort of person who can pass on a curse though and so she has to figure out a way to undo it some other way. Thus starts an amusing adventure involving a cranky witch, a girl too willing to fall for a charming smile from a rogue, a couple charming rogues, an acting troupe, and some badly written iambic pentameter.

This book is so much fun. And it's a short quick read, perfect for an afternoon of good entertainment. This is a story that can be enjoyed by a wide range of ages too.

I read an e-galley made available via the publisher, Houghton Mifflin Harcourt. Frogged is on sale now.

Heidi said…
Oh this does sound fun! You're right, I had the Disney movie running through my head by the end of the blurb and was rolling my eyes, but I like the differences you pointed out.
April 3, 2013 at 4:58 PM

Brandy said…
There was another MG novel that used the girl turning into a frog twist too, The Frog Princess by E.D. Baker. So I was thinking OVERUSED but then she turned it around nicely.
April 5, 2013 at 6:11 PM