I have never reviewed Megan Whalen Turner's books because sometimes it is hard to talk about something you have THAT MUCH love for. They come up in My Favorite Things posts a lot. I wrote this for The Queen's Thief Week Chachic hosted. But writing individual reviews? I just have never been able to contemplate that. Yet if it is possible to write a review for one it is The Thief.

Bit begged for months to have this book as a read aloud. I kept putting it off because a) I thought it might still be too mature for her and b) if she didn't like it I would have been devastated. Recently I decided it was time to give in, particularly as I could make it fit in with the study of Ancient Greece and Rome we have been doing for history. I couldn't have been happier with her reactions. 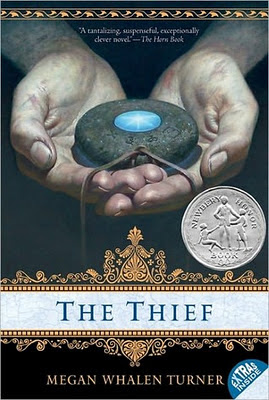 The Story
(From Goodreads)
The king's scholar, the magus, believes he knows the site of an ancient treasure. To attain it for his king, he needs a skillful thief, and he selects Gen from the king's prison. The magus is interested only in the thief's abilities.
What Gen is interested in is anyone's guess. Their journey toward the treasure is both dangerous and difficult, lightened only imperceptibly by the tales they tell of the old gods and goddesses.

My Thoughts
I read this book before I started blogging which is why I have always been comfortable with its not reviewed status. I can not stress enough how much I fell in love with this book and its hero. From the first paragraph I was enraptured. Gen's voice is perfect and having it in my head is one of the things that keeps me coming back time and again for reareads. This book was also the first book to completely surprise me in a long time. The story is meticulously crafted and one where the slightest details matter. It is even more rewarding on rereads, which is saying something given the pay off from a first time read. There is also they mythological aspect which I love. Turner completely made up a religion and its culture for her invented world and she uses it to tie her character's to their present story. The book is sheer genius from start to finish. There are some pacing issues in it here and there. This worries me every time I have shared it with any kids. The kids I taught this book to last year still bring it up in class all the time though. It moved them and changed the way they read in so many ways. It has had a similar impact on Bit.

Bit's Thoughts
I loved The Thief. It's my favorite book of all time now. Gen is the best character. I like Gen because he is brilliant and very good at what he does. Gen is also funny and sarcastic. I like how it all pieces together at the end. I was beyond surprised. I have never been surprised like that before in a book. I enjoyed the mythology because it links with the mythology I'm studying right now. I think it's awesome how Megan Whalen Turner thought up all of the parts of the book. I want to say all the things in my head but it's hard to talk about without spoiling it.

Bit is already asking when she can read The Queen of Attolia. I think she needs a couple more years of emotional maturity before she can handle it though.

What Bit and I are reading now: Harry Potter and the Half Blood Prince

Heidi said…
I'm so glad you posted Bit's thoughts, and more importantly, that you weren't let down by her love of The Theif!! This makes me incredibly happy (as does the fact that your'e currently reading Harry Potter together).
April 21, 2013 at 5:32 PM

Brandy said…
I'm always nervous when she wants to read books I love.

I have loved reading HP with her and managed to stretch it out over nearly three years. (Much to her frustration at times.) Miraculously none of her friends who read/watch them have spoiled it for her. She has no idea what's coming at the end of Half Blood Prince.
April 21, 2013 at 6:07 PM

Anonymous said…
I already mentioned on Twitter that I thought it's awesome that Bit loved The Thief. I bet she'll be bugging you about reading The Queen of Attolia until you give it. You're right though, she might need a couple more years to appreciate that.
April 22, 2013 at 11:32 AM