Wednesdays in the Tower

April 29, 2013
This is a good year for sequels. Often they can be disappointing, but all the ones I've read thus far this  year have been wonderful. Wednesdays in the Tower by Jessica Day George is no exception. This is a delightful sequel to Tuesdays in the Castle (my thoughts). 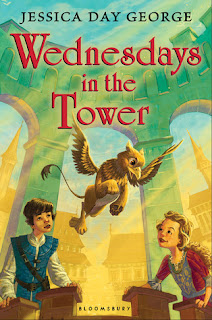 There are a lot of things that can hatch out of an egg. A chicken, for example. Or a dragon. And when the egg is the size of a pumpkin, and almost as orange, not to mention burning hot, you know that you're far  more likely to get a dragon than a chicken. So when Celie found the egg-large, orange, and too hot to touch-lying in a nest of oddly vine-like moss in the new tower, she was convinced that it held a baby dragon. Where it had come from and what would happen when it hatched were two more questions that she wasn't sure she wanted answered.

Thus begins the latest  installment in the adventures of the Glower royal family. Celie is continuing to map the castle and it is still showing a special attachment and fondness for her. She is the only one it allows near the mysterious egg after all. But the castle is behaving oddly too, rearranging and adding rooms at an alarming rate. The family is worried and when a mysterious acting wizard arrives to "assist" Bran with some things but only seems to be stalking Celie and Rufus to see why they are so fixated with  a certain aspect of the castle's history things get even stranger.

What I love about these books is how much the focus is on family. Celie has a wonderful relationship with her siblings and parents. These stories are her stories, but the rest of her family plays a large part as well. This volume focuses more on Bran and her relationship with him. It was nice to have all of the beloved characters from the first book back again in this one too.

I don't want to say too much about the story so as not to spoil anything. I will simply say it is full of excitement, adventure, humor, and mystery. Any reader who loved Tuesdays in the Castle will love this too. The third book had better be ready soon because readers will definitely want it after the way this one ends...

I read an e-galley made available from Bloomsbury. Wednesdays in the Tower will be available for purchase May 7, 2013.

LinWash said…
I loved Tuesdays at the Castle, so I'm excited about this sequel. I hope she'll keep going with the other days of the week!
May 1, 2013 at 10:18 AM