The Trouble with Flirting

April 05, 2013
I have discussed before my complicated relationship with Jane Austen retellings. When I first heard of  The Trouble with Flirting by Claire LaZebnik I figured I would be pretty safe as it is a reworking of Mansfield Park. Mansfield Park is so much a mess on its own that it's sort of  hard to ruin it. Then Christina at A Reader of Fictions wrote this review that actually made me excited about reading it. So I did and actually really enjoyed it. 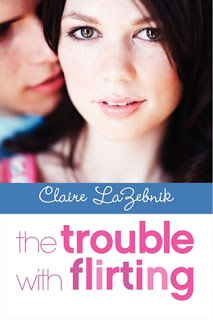 Synopsis (from Goodreads):
Franny's supposed to be working this summer, not flirting. But you can't blame her when guys like Alex and Harry are around. . . .
Franny Pearson never dreamed she'd be attending the prestigious Mansfield Summer Theater Program. And she's not, exactly. She's working for her aunt, the resident costume designer. But sewing her fingers to the bone does give her an opportunity to spend time with her crush, Alex Braverman. If only he were as taken with the girl hemming his trousers as he is with his new leading lady.
When Harry Cartwright, a notorious flirt, shows more than a friendly interest in Franny, she figures it can't hurt to have a little fun. But as their breezy romance grows more complicated, can Franny keep pretending that Harry is just a carefree fling? And why is Alex suddenly giving her those deep, meaningful looks? In this charming tale of mixed messages and romantic near-misses, one thing is clear: Flirting might be more trouble than Franny ever expected.

I will make it clear from the beginning: LaZebnik messed with the plot of Mansfield Park. She changed stuff. Big stuff. I normally have no tolerance for this sort of thing when it comes to Jane Austen. But let's all be honest. Mansfield Park needs work. I love Austen, but not that book. And I LOVE what LaZebnik did with the story. She kept the basic structure of the novel and even paid homage to the importance of theater and the concept of playing a role and hiding one's true nature, important themes from the original. There is an added infusion of Shakespeare in the story to achieve this. Further awesomeness. I am not going into details of what was changed because I don't want to spoil it. Let's just say that what she did with one character in particular made me a very happy girl.

Franny is a heroine that has confidence and insecurities in equal measure. She is a relateable and flawed character. I was frustrated with her several times because I wanted her to make better choices, but I also loved how she learned from those mistakes and how she grew as a result. She is a smart girl, and yet she is young and inexperienced at life and this make a difference in how she sees things. The other characters all come to life in wonderful ways as well. My favorite thing about this book is the dialogue which had me laughing in many places. I love the interactions between the characters and how much depth the interactions gave them all.

This is an excellent read for anyone who likes good stories about growing up with a bit of romance, whether your an Austen fan or not.

Christina said…
Yay! I'm so glad I convinced you to read this. I agree with you one hundred percent, in that I usually get pissed with changes to plotting in retellings, but Mansfield Park needs it. Thank goodness Franny has a backbone, even if she does make some of the same boneheaded choices that Fanny did. She also learns as she goes along and doesn't marry her cousin. Improvements!
April 8, 2013 at 1:11 PM