April 09, 2013
Isn't it great when a series just gets better and better with each installment? That is definitely the case with the Kat, Incorrigible series by Stephanie Burgis. The third, and final, book is the best and that is saying something when the first two were so good. There is so much to love about Stolen Magic. 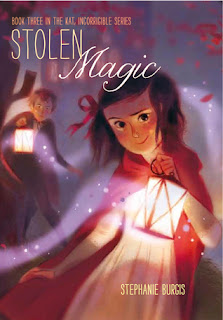 Synopsis:
With just days to go before her sister Angeline’s long-delayed wedding to Frederick Carlyle, the impetuous Kat Stephenson has resigned herself to good behavior. But Kat’s initiation into the magical Order of the Guardians is fast approaching, and trouble seems to follow her everywhere.
First, Kat must contend with the wretched Mrs. Carlyle’s attempts to humiliate her sister; the arrival of the mysterious Marquise de Valmont, who bears suspicious resemblance to Kat’s late mother; and Frederick’s bewitching cousin Jane, who has Charles Stephenson tripping over his feet. But when a menacing boy with powerful magic starts hunting Kat, a dastardly villain tries to kill Angeline, and the Guardians face a magical robbery that could spell the end of their Order, propriety becomes the least of Kat’s concerns.
Can Kat save her sister’s life, the Order of the Guardians, and England itself before it’s too late?

Let's pause a moment to admire how gorgeous this cover is. That expression on her face is absolutely perfect. So much of Kat's personality is conveyed in her face there.

I loved the Regency house party set up of Kat Incorrigible (my thoughts) and I loved the mystery and political aspects of Renegade Magic (my thoughts).  Stolen Magic combines both of these so it's not surprising how much I adore it. There is more than one mystery going on here and the plot is full of action, adventure, and, of course, magic. I don't want to say much more than that about the story. If you enjoyed Kat's other adventures you will enjoy this as well.

My favorite part of this series is the characters and how they grow and change. Kat is far more disciplined even if her family hasn't quite realized it yet. Lady Fotherington continues to be as vindictive and mean as ever, but watching Kat foil her is one of the most fun aspects of each novel. Charles really comes into his own in this story. The events in Bath forever changed him and watching Kat contend with this new and improved version of her brother is just wonderful. Two new characters are introduced in this book as well and they are both amazing (and that's all I can say about that).

The twists and surprises at the end were delightful, but they definitely had me wishing for more to come. The story definitely comes to a close, tying up the loose ends and story lines begun in the trilogy. It is satisfying, but I just don't want to let go of these characters. I love them all so much. I can only hope someday there will be more.