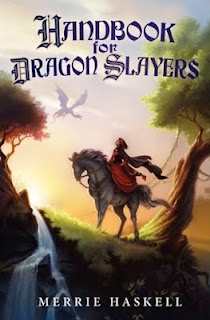 Tilda has never given much thought to dragons, attending instead to her endless duties and wishing herself free of a princess's responsibilities.When a greedy cousin steals Tilda's lands, the young princess goes on the run with two would-be dragon slayers. Before long she is facing down the Wild Hunt, befriending magical horses, and battling flame-spouting dragons. On the adventure of a lifetime, and caught between dreams of freedom and the people who need her, Tilda learns more about dragons—and herself—than she ever imagined.

Tilda is not the typical heroine of a princess story, even a rebellious princess story. She is not longing for adventure, she wants to be left alone to write books. She has a foot deformity that causes her to limp and leaves her feeling self conscious all the time. She has built up walls to keep her emotions safe and her heart from being hurt. As a result she doesn't always understand the motivations and actions of the people closest to her. She is a sympathetic and likable character and I admire her ambitions, if not all of her choices. I do love how her choices lead her to see herself in new ways and therefore make better choices for her and her people.

As the title would suggest there are dragons in this story and some interesting twists involving them as well. There is nothing new or special about the treatment of dragons, it is simply perfect in its dragony ways. The Wild Hunt and the villain desperate to ensnare a wish from them gave a sinister creepy element to the plot that struck just the right tone. Trying to piece everything together and see what would happen next made for an engrossing read.

Friendship plays a big part in Tilda's journey, her learning how to be a friend and accept friendship. She has two wonderful, though often misguided, companions and both are important to her character's development and contribute in their own ways to the story. I thoroughly enjoyed Haskell's treatment of this theme and how she resolved one particular problem through the power of friendship and left romance out of it.

This is a wonderful read for anyone who loves stories of adventure, friendship, discovery, and dragons.

I read an ARC won from Harper Children's in a Goodreads giveaway. The Handbook for Dragon Slayers is on sale May 28.