May 13, 2013
Last year I completely fell for a surly, mischievous, puck named Rook and a strong, kind-hearted, girl named Fer when I read Winterling by Sarah Prineas (my thoughts).  When my copy of Summerkin, the sequel, arrived it was no surprise that I lost interest in everything else in my TBR pile and had to read it right away. I am happy to say that I adored it and am more in love with the characters than ever. 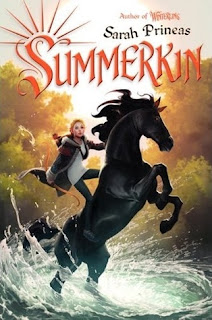 Fer, who defeated the evil usurper who had murdered her parents and taken over the Summerland, now must come to terms with what it means to be the ruler. She is fiercely determined not to take oaths from her people knowing how they were abused when they did that before. Her refusal to do this has put her right to rule in question. The High Ones have requested that she come to compete in a competition. The winner will win the right to rule the Summerlands. Rook, now freed from his oaths to the evil Mor, has returned to his Puck brothers. They are determined to create mischief and what better place to create mischief than at a competition the High Ones have organized at the nave? And what better puck to send than Rook, who the Lady Gwynnefar foolishly trusts and calls friend? But there is a sinister presence at the nave ready to challenge Geynnefar and Rook finds himself torn between his duty as a puck and the strange bond that keeps forming between him and Fer.

Fer's journey to learn what sort of leader she wants to be and how to implement that proves how perfect she is for the job. Her strength under pressure, her compassion for all, and her ability to empathize make her a great leader. She wants to see the good in every one, but isn't afraid of standing up to those she sees as threatening her people. Yet she is so lonely because she is seen as the Lady by her people and as a half-human usurper by most of her peers. It is heart wrenching the ways she wants to trust Rook, but can't help doubting. Particularly when he keeps telling her not to trust him. At the same time it is heart wrenching to see Rook wanting to be what she needs but fighting it at the same time. He doesn't know how, it's against his nature. As much as I want to smack him sometimes I can't help but love him. He is obnoxious but endearing, because he is also noble and upstanding in his own way. I really love how the books in this trilogy are focusing on both of their character arcs and their relationship. It was lovely to see Fer's relationship with Fray and Twig growing as well.

There are some great new characters added to the story this time too. Two of Fer's competitors, Gnar and Lich, are fascinating and I would love to see more of them. Arenthiel makes the perfect villain, smarmy and insidious in all the right ways. All the other pucks in the story are a marvelous additon as well.

The competition aspect of the story kept the pacing moving quickly and makes for a riveting read. There is always something going on, something to discover, something to think about. All this builds up to intense moments. I continue to appreciate what Prineas is doing with faerie-lore in these books.

I'm ecstatic that we only have months to wait for Moonkind, which will release in January.