Harry Potter and the Half Blood Prince

May 11, 2013
Reading Harry Potter to Bit has been one of the most fun experiences of my life and I have managed to stretch it out over three years. It is coming to an end though as I promised to read the last two books back to back and we have finished The Half Blood Prince. 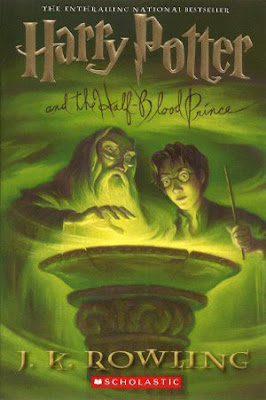 The Story
The wizarding world knows of Lord Voldemort's return and fears are running high. People are disappearing or found dead. The Ministry is powerless to find the Death Eaters or stop their destruction. Hogwarts isn't even safe anymore as strange and terrifying attacks are harming students. Yet school is still school. There are lessons to learn, Quidditch to play, and girls eager to slip Harry love potion for the chance of a date with him. To add to this stress Ron and Hermione are at odds again, Harry is convinced Draco is up to something nefarious and no one will listen to him, and Dumbledore is giving Harry extra lessons about Tom Riddle's dark past. Fortunately Harry is getting a little extra help from an old Potions textbook belonging to a brilliant wizard known as The Half Blood Prince. But who is the Prince and can he really be trusted?

Bit's Thoughts
The Half Blood Prince was awesome. Harry was funnier in this book than in the last book. He was less annoying. I like that Ginny was in it more. She's my favorite character. It was surprising when you learn that Slughorn is teaching Potions instead of Snape. The end is interesting, surprising, and sad.

My Thoughts
The Half Blood Prince is the book in the series I have reread the least so I was pleasantly surprised by what a great read aloud it made, particularly in comparison to books four and five. This is a bridge to the final book, setting the stage for the final confrontation between Harry and Voldemort. Rowling sets that stage brilliantly though. True a lot of it is through Dumbledore telling Harry things but all of the things are fascinating, a deeper more layered look at the villain and world of magic. It makes it all more nuanced which I love. Then there is the mystery, the humor of the typical high school social workings, and, of course, the shattering events of the end. I liked it far more than I remembered liking it on earlier reads.

What Bit and I are reading now: Harry Potter and the Deathly Hallows by J.K. Rowling

Heidi said…
I recently listened to this on audio for the first time, and was surprised by how much I liked it in relation to the other books as well! In fact, I'd mark it one of my favorites. So glad Bit enjoyed, I love seeing her thoughts on books. =)
May 11, 2013 at 3:55 PM

Brandy said…
I love that Bit likes to share her thoughts, but I wonder how much longer that will last. I only ever do this when she says she wants to.
May 11, 2013 at 4:37 PM

Christina said…
Awwww, reading with your daughter is the best parenting choice evar. :) I bet you've got a lifelong reader on your hands! I need to reread this one. I think I've just read it and 7 once each. My body was not ready for a reread yet. Haha.
May 13, 2013 at 11:43 AM

Brandy said…
Reading with my kids is my favorite daily activity. Even when I think I don't want to do it because I'm tired or irritable or they're being whiny and annoying, it always makes everything better.