May 06, 2013
Children exploring old house with hidden rooms and passages. Check. Mysteries and puzzles connecting past to present. Check. Complicated family relationships. Check. Magic, myth, and science fiction blended together. Check. The Water Castle by Megan Frazer Blakemore contains all of this and the sort of storytelling to keep the reader flipping pages. 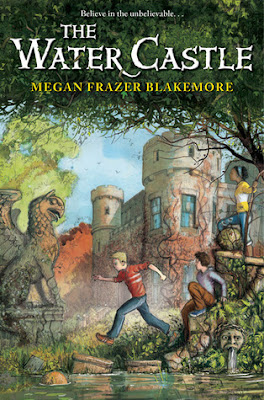 Ephraim Appledore-Smith feels like he is sure to be a big deal in this small town. After all, he is a sophisticate from Boston. Finally this will be the chance to break out from his older brother's shadow, to be more than average for once in his life. Ephraim gets an unpleasant shock when he discovers his new home is not the backwards place he believed it to be.  All the kids are advanced and smart for their age. The middle school has access to technology only universities typically have. Ephraim once again finds himself not just being average but less than that. Newly arrived in town and making mistakes everywhere he turns he seems to have antagonized two students who quietly live their lives on the outside as well.

Mallory is descended from the Darling family on her mother's sides. Growing up Mallory's parents told her stories about the magic of the Castle and the things that went on there. Stories about the famed Fountain of Youth. Mallory believed the stories with all her heart, repeating them at school and earning her ridicule from her classmates. Now her mother has left and Mallory is angry at herself for believing the stories were ever real.

Will Wylie is a scientific genius with a burning desire to leave his small town and go to MIT. He wants to change the world and do great things. For now he is stuck in the town his family has lived in for centuries, and stuck also in the bitterness his father carries for the family he believes robbed them of everything.  Will's father blames the Appledores for all the family's hard luck and Will is tired of the anger around him all of the time.

These three form a bond over both their history project and their need to figure out the secrets of The Water Castle. Ephraim wants to save his father. Mallory wants the truth at all costs. Will just wants freedom. I completely fell in love with all three of these kids and did not want their story to end. At first I found Ephraim and Mallory to be a little too sulky, but they are both genuine portrayals of middle school age children. There is a lot to relate to there for the age group. Will I liked instantly. Watching these three form a friendship is wonderful. I love how they start out exploring the tunnels and end up in a game of myhological-creature-freeze-tag. Blakemore perfectly portrays the pull between grown up endeavors and childhood games that exists at that age, and it is great to see that these three are able to find something so simple to put them at ease with each other and bring them together. The part their history project on explorers plays in this is brilliant too. Each of them is assigned one of the explorers involved in the Arctic expedition of 1908. Ephraim has Admiral Peary. Mallory has Henson, Peary's assistant. Will has Frederick Cook, the man who claimed to have beaten Peary to the Pole by a year. How perfectly symbolic in the smaller struggle of their family histories is that? These three decide to work together much to the shock of everyone they encounter, and the discoveries that they make end up changing all of them.

The story has flashbacks through the story to the time in 1908 when Orlando Appledore was experimenting with the properties of the water and continuing his family's search for the Fountain of Youth. This is shown through the eyes of his young assistant, Nora Darling, and the heir apparent to the Appledore fortune, Harry. This is a time famous in the town's history. It was the year the spa and resort the Appledore family owned near the Castle mysteriously burned to the ground. Blakemore does an excellent job tying the two stories together and showing the threads that connect the past and present. There are hints to a puzzle and secret here that are so subtle they are possible to miss. The truth they contain is going to be a delight for any reader who figures it out.

My only hesitation over this book is in the ending. It is very loosely tied, but that is  not what bothers me. I came to really love those three kids and at the end there is still so much that could devastate them. Ephraim and Will are never going to be the same. All three have discovered truths that will be hard to swallow and live with. The reader has all the pieces to a puzzle Mallory is still unaware of that is going to rock her worldview when she finds out. In one way I like the looseness of this, that the questions are left unanswered and that the reader can imagine any future for these heroes. On the other hand, I came to care for them so much I want to know they will be okay with it all.

It is a book you can't stop thinking about once you are done reading it. I really want to form a discussion group to talk about it because there is so  much to talk about. That is what the greatest sort of books do. Inspire you to think, question, and wonder. This book excels at that and gives the reader an adventurous story and characters to love at the same time.

**Also in a side note, the fact the kids were reading Tuck Everlasting-and it was just mentioned and not focused on-had me smiling.**