May 05, 2013
You know how there are books or series people talk about and you think, "I would probably like that. I should read it." But then you don't. And you continue to put it off. More. And then some more. For no good reason. Then one day you finally pick up the book and want to smack yourself for not having done it sooner. Am I the only one who does this? Well, Kiki Strike is a series I did this with. And I have so much love for it.


Inside the Shadow City by Kirsten Miller 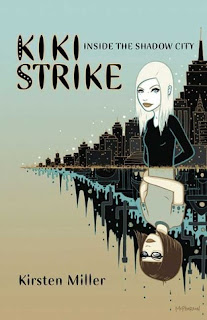 I've always found that one of the biggest benefits of being a girl is that most people refuse to take you seriously. While boys must be constantly monitored and are always the first suspect when anything goes wrong, everyone expects a girls to do what they're told. It may seem a little insulting at first, but low expectations can be a blessing in disguise. If you're smart, you can  use people's foolishness to your own advantage. It's amazing what you can get away with when no one bothers watching.

Let's start with that voice. Smart, snarky, and subversive in equal measure. Is it any wonder that I fell in love with this book? The character who goes with the voice is just as intriguing. Her name is Ananka and when the story begins she is a mere 12 years old and super curious. When a sink hole opens up near her Manhattan home and she sees a mysterious form climb out she decides to investigate. What she discovers is a secret underground city known as The Shadow City. Soon she has joined forces with the mysterious Kiki Strike and they have formed a group with four other girls who have trouble fitting in for various reasons. A master counterfeit artist, a chemist, a mechanical engineer, and an expert in the art of disguise. These six girls form a group determined to explore the Shadow City and take control of it. But Kiki seems to be after more than she is letting on and clearly has secrets. How much can the other girls trust her?

Talk about girl power. I love that all of these girls are amazing in their own individual ways. The friendship and camaraderie between them is wonderfully depicted. Their story contains plenty of action, intrigue, suspense, and mystery. The city of New York becomes just as much a character as the girls begin to map out and explore the world underneath it. Complete with millions of rats. Everything about it is almost perfect. 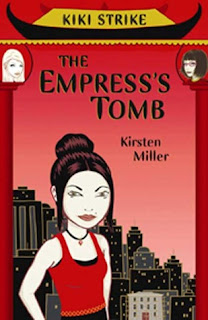 The Empress's Tomb by Kirsten Miller

This book, which opens a few months after the first book ends, is a story about secrets and the price you pay to keep them.   Ananka's parents are ready to ship her to boarding school afraid she is becoming a delinquent. Kiki is keeping secrets again. And it turns out Oona has the most massive secret of all that could bring a stop to the Irregulars and cause them to lose The Shadow City. I enjoyed the way Miller dealt with the theme of secrecy and the dangers inherent in them through the story. Some of the secrets are obvious and some are not. Secrets you think are unimportant turn out to be more powerful than the ones you thought were the biggest. There are secrets everywhere. Added into this story is an amazing principal, a delinquent genius of an artist, the Metropolitan Museum of Art, and ghostly activities. Also giant kleptomaniac squirrels. 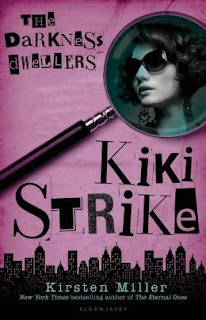 The Darkness Dwellers by Kirsten Miller

While an entertaining read, this volume lacked some of the power of the first two volumes. It is still a wonderfully fun adventure story about smart girls doing awesome things. It ties up the loose ends well and still leaves plenty of room for the imagination. The problems is that there was a little to much going on. I would have loved this if it had stayed fixed on Kiki, Etienne, and The Darkness Dwellers. I also enjoyed the part of the story featuring Amelia and Betty, but it is a part of the Darkness Dwellers' story. The back and forth between this Paris plot and the things the rest of the Irregulars were doing in NY made for too much story though. Oona's story could have been wrapped up faster and I think DeeDee's story was unnecessary. I could also have done without Ananka's frequent attempts to poach Kaspar. Still. I enjoy these characters and was willing to see their story through to the end. And I did really love the Parisian Darkness Dweller part. That was awesome.

I recommend this trilogy for anyone looking for a great tale of adventure and mystery starring some smart, sassy, butt kicking girls. These books can be enjoyed by precocious younger readers too.