Across a Star-Swept Sea

October 10, 2013
The Scarlet Pimpernel is one of my all time favorite books. On one hand it is so much fun with romance, melodrama, and mustache twirling villains. On the other hand it deals with some pretty serious issues such as what lack of respect and trust do to a relationship, what we owe our fellow man, and what individuals do to try to make the world better when their governments can't (or won't). So I was excited when I learned Diana Peterfreund's latest novel, Across a Star-Swept Sea would be a futuristic retelling of this wonderful story, and that she was flipping the genders of the two main characters. The book did not disappoint, it has the same balance of fun and seriousness as the original. 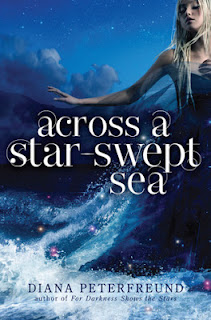 Centuries after wars nearly destroyed civilization, the two islands of New Pacifica stand alone, a terraformed paradise where even the Reduction—the devastating brain disorder that sparked the wars—is a distant memory. Yet on the isle of Galatea, an uprising against the ruling aristocrats has turned deadly. The revolutionaries’ weapon is a drug that damages their enemies’ brains, and the only hope is rescue by a mysterious spy known as the Wild Poppy.
On the neighboring island of Albion, no one suspects that the Wild Poppy is actually famously frivolous aristocrat Persis Blake. The teenager uses her shallow, socialite trappings to hide her true purpose: her gossipy flutternotes are encrypted plans, her pampered sea mink is genetically engineered for spying, and her well-publicized new romance with handsome Galatean medic Justen Helo… is her most dangerous mission ever.
Though Persis is falling for Justen, she can’t risk showing him her true self, especially once she learns he’s hiding far more than simply his disenchantment with his country’s revolution and his undeniable attraction to the silly socialite he’s pretending to love. His darkest secret could plunge both islands into a new dark age, and Persis realizes that when it comes to Justen Helo, she’s not only risking her heart, she’s risking the world she’s sworn to protect.

I adored both Persis and Justen. Persis is so young, only 16, and this shows in her confusion and often tumultuous emotions. She is brilliant, a gifted diplomat, loyal, and brave. She is still so young though and I like how that was evident in her interactions with Justen and her desire and need to trust him. Justen is also brilliant. He is a medic and scientist, truly great at what he does even though he is also young. He isn't completely clueless when it comes to Persis either. He knows she isn't as vapid as she sometimes acts, but he's confused about the different sides of her he's noticed and decides she is apathetic to the important events going on around them. I enjoyed the way their relationship played out, the tentative friendship that developed, the way they fought their attraction to each other, how they discovered each others' secrets, and how it was resolved. The gender flip worked really well, particularly because it brings up such good points about expectations. Justen has some great introspective moments on his own innate snobbery and whether or not Persis was able to fool him simply because she acted the way he expected females of her ilk to act.

The villain, Vania, is daring, rash, and slightly unhinged by the end. She fits the role of villain for a retelling of The Scarlet Pimpernel perfectly. She isn't very nuanced or layered, but that's okay because what her character is works for this story.

The narration is third person omniscient and the reader knows what everyone is doing and thinking. There are no real surprises. However, this did not take a way from the action at all. Even knowing the story of the original I was on the edge of my seat. The world in this book is very different than it's companion novel, For Darkness Shows the Stars (my thoughts). The people of New Pacifica have no problems with technology and the world is full of wonderful tech gadgets, futuristic versions of things we use today. I enjoyed this aspect as well as the political themes brought out in both countries. Peterfreund did a great job of mirroring England/France, while also creating a unique and interesting world.

Across a Star Swept Sea is an excellent novel in its own right and wonderful retelling of a beloved classic. It is a companion to For Darkness Shows the Stars, but can be read as a stand alone (though the world will be better understood if one reads both in order I think). I enjoyed Across a Star Swept Sea more because I loved both Persis and Justen so much and was so caught up in their story.

I read an e-galley provided by the publisher, Balzer+Bray, via Edelweiss. Across a Star Swept Sea is available for purchase on October 15.