October 22, 2013
I love fairy tales and fairy tale retellings and I ordinarily try to read them as soon as possible. I decided to wait on Cinder by Marissa Meyer because I knew it was first in a series. Also I'm sort of over the futuristic thing for the most part, even if it's futuristic fairy tales. (Haha-so I told myself.) I was going to be cool and calm. Then Scarlet came out and my interest level went up. Way up. I mean, a retelling of "Little Red Riding Hood"!?! How often do we see that? Not often. Still. I was cool and calm. Then they revealed the cover for Cress and I gave up the whole cool and calm thing. I'm in now. I'm all in. 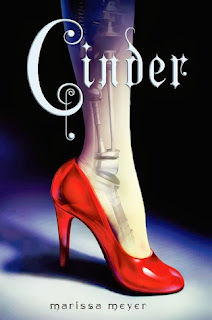 Humans and androids crowd the raucous streets of New Beijing. A deadly plague ravages the population. From space, a ruthless lunar people watch, waiting to make their move. No one knows that Earth’s fate hinges on one girl.
Cinder, a gifted mechanic, is a cyborg. She’s a second-class citizen with a mysterious past, reviled by her stepmother and blamed for her stepsister’s illness. But when her life becomes intertwined with the handsome Prince Kai’s, she suddenly finds herself at the center of an intergalactic struggle, and a forbidden attraction. Caught between duty and freedom, loyalty and betrayal, she must uncover secrets about her past in order to protect her world’s future.

Cinder is a wonderful heroine. She's a brilliant mechanic (grease spots instead of ashes). She is a smart, caring, and fierce when angry. I really liked her relationship with her nice stepsister and her family's android. Experiencing her adjustments to her rapidly changing reality was a wonderful ride. The plot is fast paced and interesting. I loved the world Meyer created and found the Lunar people, who were human colonists on the moon who changed to have some Fae type abilities. The blending of this old type of folklore with the futuristic setting was genius. I also enjoyed the twists that Meyer gave the original tale, including not ending it in the manner one would expect. Prince Kai is a bit of  a disappointment, not at all swoon worthy, but I LOVED that aspect and can't wait to see where Meyer is taking this whole thing. In this volume a lot of time is spent building the world, so the characters other than Cinder aren't developed as well as I normally like. Still, the book is so much fun and I'm sure the rest of the series will be the same. I do like how she managed to introduce elements of the three other heroines into this one.

I came away for Cinder feeling greatly entertained, with an longing to know what would happen next, but without any real intense feelings. Then I read Scarlet... 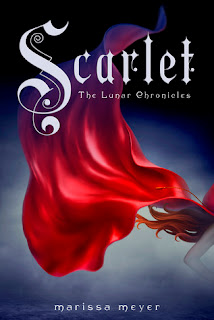 Scarlet Synopsis:
Cinder, the cyborg mechanic, returns in the second thrilling installment of the bestselling Lunar Chronicles. She's trying to break out of prison—even though if she succeeds, she'll be the Commonwealth's most wanted fugitive.
Halfway around the world, Scarlet Benoit's grandmother is missing. It turns out there are many things Scarlet doesn't know about her grandmother or the grave danger she has lived in her whole life. When Scarlet encounters Wolf, a street fighter who may have information as to her grandmother's whereabouts, she is loath to trust this stranger, but is inexplicably drawn to him, and he to her. As Scarlet and Wolf unravel one mystery, they encounter another when they meet Cinder. Now, all of them must stay one step ahead of the vicious Lunar Queen Levana, who will do anything for the handsome Prince Kai to become her husband, her king, her prisoner.

I really enjoyed what Meyer did with the tale of Red Riding Hood, how she manipulated and made it her own. And how she managed to include the fraught sexual themes of the tale without getting into a creepy weird dynamic or being explicit. At all. That was really well done. And when I say that the relationship dynamic wasn't creepy weird that truly means something. I have no attraction to stories about dangerous men and the girls who fall for them. I hate them quite frankly. This made m e a little wary going into this one, but the way Meyer presented the situation it worked for me. I actually adored everything about Wolf and Scarlet. Separately and as a team they are both wonderful.

The BEST part of this story though I wasn't even expecting..

The story here bounces back and forth between Wolf and Scarlet and what Cinder is up to. She is escaping from prison and also trying to find Scarlet's grandmother. Along the way she picks up a companion. An accomplice. His name is Captain Thorne. OH. MY. GOODNESS. As much as I wasn't turned off by Wolf, I didn't find him swoon worthy either. Kai also continues to be not swoon worthy. Thorne is making up for their lacks already. He is vain, sarcastic, and has a penchant for picking up items that belong to other people. Any regular reader of this blog knows there was no question about my falling for him. And did I ever. Given his name and personality I have high hopes for his amount of page time in Cress.Which I basically want NOW. This is why I wasn't going to start this until they were all out. Sigh. Still. I have no regrets.