October 30, 2013
Sometimes it is so hard being a blogger, because books like Sorrow's Knot by Erin Bow come along. A book that is so beautifully written, heart wrenching, and immediately beloved that I know whatever words I come up with to tell you about it will be woefully inadequate. 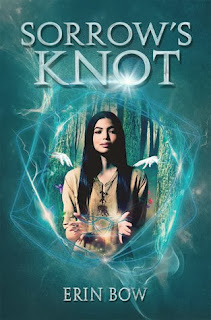 Synopsis:
The girl who remade the world was born in the winter.
The dead do not rest easy. Every patch of shadow might be home to something hungry, something deadly. Most of the people of this world live on the sunlit, treeless prairies. But a few carve out an uneasy living in the forest towns, keeping the dead at bay with wards made from magically knotted cords. The women who tie these knots are called binders. And Otter's mother, Willow, is one of the greatest binders her people have ever known.
But Willow does not wish for her daughter to lead the lonely, heavy life of a binder, so she chooses another as her apprentice. Otter is devastated by this choice, and what's more, it leaves her untrained when the village falls under attack. In a moment of desperation, Otter casts her first ward, and the results are disastrous. But now Otter may be her people's only hope against the shadows that threaten them. Will the challenge be too great for her? Or will she find a way to put the dead to rest once and for all?

The writing in Sorrow's Knot is wordcraft at its most eloquent. Otter's story is a complicated one that ties the mythology of her people with their present dangers. Otter hears the stories, some of which are forbidden, from her best friend who is training as a storyteller. She also finds herself living a story. A story in which she, a binder, plays an integral part just as another binder did so many years ago. Bow uses all of these elements in the structure of her story. Every word and sentence has the cadence and rhythm of a story being told. In Otter's world the storytellers use drums and rattles as they spin their tales, and I swear you can even hear that in the way Bow strung her words together. Then there is the binding aspect. Every piece, every segment, every word is tied together the same way Otter ties her wards, creating magic but also binding the reader. As I read there were places where I could feel those bonds tightening on me as they were on Otter.

And let's talk about Otter, who is now holding the number one spot for best heroine in a book I've read this year. She is facing difficult odds, rejected by her mother, adrift, not knowing what she wants to do. The only this she ever wanted to be was taken from and at first she does nothing to move out of her drifting state. Bow established early and well that Otter has courage, power, and will though and all of those things come to serve her well as she is faced with ever increasing hardships. She has to make so many difficult choices and they don't always turn out for good. In fact they often turn out quite horribly. I love how she learns, grows, and faces what comes next even when she has just pulled through horror that could break most people. (And indeed does.) Otter is as successful as she is though because she has an amazing support team in her best friends, Kestrel and Cricket. I loved both of them just as much as Otter. Each has their own strengths and faults and the three of them fit together so well as a team. Later in the book an equally wonderful character, Orca, also joins Otter in her journeys and struggles. All four of these characters forever hold places in my heart.

The world here is reminiscent of pre-colonized North America, but is not based on any particular culture. That is all Bow's brilliant creation. The world feels so real that you can almost believe it to be true though. Bow's prose brings the forests, the caldera, the frozen river, every place her characters go to vivid and colorful life. Her descriptive talents also manage to create one of the most horrific monsters I have read of in some time. The White Hands are not fully evil, which makes their hunger and anger all the more terrifying. Through Otter's story so much is said of tradition-both its importance and the importance of challenging it, how knowledge and understanding of the past can illuminate your present and direct your future, and the importance and magic in the words of the story.  A favorite quote:
"A storyteller can spin a web that will hold the dead listening until they dry up like stranded eels. A storyteller can change men's minds. Tell their futures. Compel their help. Create their love. With a little work and time, Kestrel, this storyteller could drive you quite mad."

Sorrow's Knot has a definite place in my top 10 list for the year. It is actually one of the top three books I've read this year. I can not recommend it highly enough.

I read an e-galley provided by the publisher, Arthur Levine Books, via NetGalley. Sorrow's Knot is available for purchase now.

Charlotte said…
I am almost finished reading this, and like you I am deeply impressed. The writing is beautiful.
October 30, 2013 at 10:06 PM

Brandy said…
I loved the characters and story too. I haven't been wowed by a book like this in quite some time and I needed to be so badly.
October 30, 2013 at 10:16 PM

Anonymous said…
Wow, sounds like such a good fantasy book! I already have this on my wishlist and it looks like I have to read it sooner rather than later. I'll probably pick it up when I'm in the mood for an amazing read.
October 31, 2013 at 4:56 AM

Unknown said…
What I love about this book -besides the excellent writing and characters - is that it manages to be both epic in nature, and yet very personal. It was utterly important to find out how White Hands were created. But painful to see the task fall to these three friends.

I HIGHLY recommend SORROW'S KNOT to readers who are in the mood for stylized narrative that will transport them to somewhere else.