October 04, 2013
Tandem by Anna Jarzab is a book about parallel universes, political intrigue, and war. I was intrigued from the moment I read about it despite the allusion to a possible love triangle (It isn't a love triangle though so don't let that turn you off.). I was excited to receive an e-galley. It was an entertaining read, but in the end my feelings are mixed. 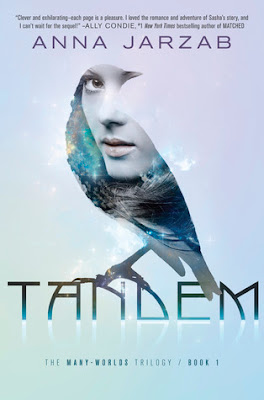 Synopsis:
Everything repeats.
You. Your best friend. Every person you know.
Many worlds. Many lives--infinite possibilities.
Welcome to the multiverse.
Sixteen-year-old Sasha Lawson has only ever known one small, ordinary life. When she was young, she loved her grandfather's stories of parallel worlds inhabited by girls who looked like her but led totally different lives. Sasha never believed such worlds were real--until now, when she finds herself thrust into one against her will.
To prevent imminent war, Sasha must slip into the life of an alternate version of herself, a princess who has vanished on the eve of her arranged marriage. If Sasha succeeds in fooling everyone, she will be returned home; if she fails, she'll be trapped in another girl's life forever. As time runs out, Sasha finds herself torn between two worlds, two lives, and two young men vying for her love--one who knows her secret, and one who thinks she's someone she's not.

I really liked Sasha as a main character. She is smart, courageous, and thinks fast on her feet. I was impressed by how she refused to accept her situation easily. She knew she was in danger no matter what, but hated being controlled. I love how she chose to fight for her freedom at first and didn't just comply. I also love how she did end up complying, because by the time she did it was the best she could make of the situation. She does so much in her role as Juliana that she doesn't have to: continuing to sit with the debilitated king, trying to decipher the message he seems to be telling her, attempting to spare the feelings of Callum, the boy Juliana is betrothed to. He wants to make the best of their situation and she doesn't want to lead him on, thinking she won't be there long. Her character was well drawn and kept me in the story even when other things were annoying me enough they might have thrown me out of it. Thomas, the young operative who kidnapped Sasha from her world and is also the princess's bodyguard, is an intriguing character too. What he did to Sasha is awful, but from his soldier-take-orders-loyal-to-his-country perspective is all that can be done. I like how the reader sees his belief in that unravel, how he questions things, and how he tries to make things right. Callum felt more like a plot device than anything else, only there to move the action in a particular direction at one point.

The book opens with an intriguing look at the Princess Juliana and her world, and then switches to Thomas coming to Earth. It is highly mysterious and intriguing. The book shifts from third person Juliana, third person Thomas, and first person Sasha perspectives. This was jarring at times and felt like a bit too much. The first few chapters are fast paced and adventurous. The pace slows down a bit while Sasha is playing the role of Juliana at the castle, but picks up again at the end. There are many twists and turns, some of which I figured out and some I didn't. My one big complaint with the book is that the romance felt too forced. It happened too fast. The majority of the book takes place in 7  days. Sasha knew she was only in Aurora temporarily. Thomas knew she was out of bounds. I know they're young, but they are both smart so their willingness to let emotion direct them so much rang untrue for me. I prefer romance that develops slower and progresses in a way that is believable. It felt contrived to make the events in the last quarter of the book more intense. I also had issues with the last page, particularly the last line. That was cheesy. Not that this will keep me from reading the second book. I liked the characters enough to keep reading and find out how the twisted snarl of all their fates will turn out.

I read an e-galley provided by the publisher, Delacorte Books for Young Readers, via NetGalley. Tandem is available for purchase on October 8.