October 16, 2013
I love anything N.D. Wilson writes, but his Ashtown Burials Series has become one of my all time favorite series and that status was cemented when I read an e-galley of its latest installment, Empire of Bones. 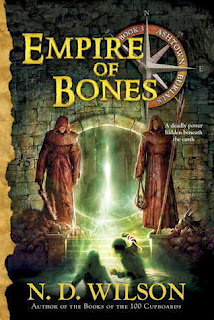 This is a series and you need to read the first two installments before reading this one. They are The Dragon's Tooth (my thoughts) and The Drowned Vault (my thoughts). If you haven't read those, go now. Don't waste any more time.

Synopsis:
Cyrus and Antigone Smith have thwarted Dr. Phoenix's plans—for the moment. And they've uncovered a new threat from the transmortals and managed to escape with their lives. Their next adventure will take them deep into the caves below Ashtown, where they will look for help from those imprisoned in one of Ashtown's oldest tombs.

Like its predecessors, Empire of Bones gets off to an action packed start and just keeps going. There are moments of calm but they are briefer than ever as the heroes are racing toward an unavoidable confrontation with two sets of opponents. This book is mostly about that confrontation and the immediate events leading up to it. Through this the characters that have made the series so outstanding continue to be nuanced and wonderful. The amount of growth in Cyrus over the three books so far is impressive. In this book Antigone also has some growing to do as she confronts her fears and her changing relationship with her little brother. Antigone is seeing the difference in him and there is some reconciling reality with expectation that she needs to do. There is a conversation between Antigone and Diana about Cyrus that only a guy's sister and a girl most definitely not his sister can have about him. It's one of my favorite scenes because it so deftly developed all three of their characters so much more in just a couple of pages. That is the way to do character development.

As for the other characters, they are ALL back again in this volume. Characters from the first book not in the second even make a return (this includes the giant turtle Leon). Nolan continues to be one of my favorites, as does Arachne (but she was not around as much as she was in the last book). A few new characters were  introduced into the mix yet again as well. It all reached a point about halfway through the book where I wondered if it had grown too big and maybe the whole creation was going to topple like a house of cards. Not that it was wobbly, I just couldn't possibly see how it would all come together. Wilson managed it though and with great finesse. There is a major battle, lives are lost, and people are seriously hurt. This was all done realistically without being overly graphic and violent.

One thing I really appreciate about this series in contrast to others of its ilk is how present and accounted for the adults are. They are true mentors, trying their hardest to teach the kids and protect them, while acknowledging they are in danger no matter what. The relationship between Cyrus and Rupus is particularly interesting.

The aspect of the book that impressed me the most though was Wilson's deft use of biblical symbolism and how he wove it into the story. I really like how he handled that, and how he took a rather different tack than other authors who have dealt with similar themes.

As usual, I marked so many pages with amazing quotes, but I think I will limit myself to just one:
In every herd, many stampede, while only a few turn to face the lions. Cowards live for the sake of the living, but for heroes, life is a weapon, a thing to be spent, a gift to be given to the weak and the lost and the weary, even to the foolish and cowardly.

Every word this character speaks for the next two pages is wonderfully poignant and true. Then Cyrus's response is FUNNY and it struck exactly the right balance and released so much tension. That is the craft of writing at its finest.

The Ashtown Burials are among those books that straddle the upper MG/lower YA ends of the market, but they are for anyone-whatever age -who loves adventure, mystery, mythology, and darn good writing.

I read an e-galley made available from the publisher, Random House Books for Young Readers, via NetGalley. Empire of Bones will be released October 22.