November 21, 2013
The Boxer Rebellion is arguably the most profound example of the disaster than can arise from cultural cross-purpose and Imperialism. Atrocities were committed by every nation involved and innocent lives were lost from every nationality in China at the time. Though none were affected more than the Chinese themselves, both Boxers and Christians. In his new duology of graphic novels, Boxers and Saints, Gene Luen Yang explores the ideas, beliefs, and actions of both these groups, giving the reader an up close and personal experience with the some of the most important events of the conflict. 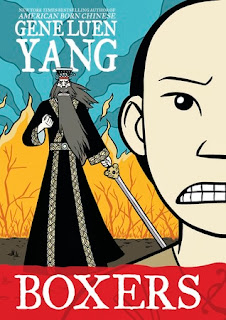 Synopsis:
Boxers & Saints is a groundbreaking graphic novel in two volumes. This innovative format presents two parallel tales about young people caught up on opposite sides of a violent rift. Saints tells Vibiana's story, and the companion volume, Boxers, tells the story of Little Bao, a young man who joins the Boxer Rebellion.
Boxers: China,1898. Bands of foreign missionaries and soldiers roam the countryside, bullying and robbing Chinese peasants.
Little Bao has had enough. Harnessing the powers of ancient Chinese gods, he recruits an army of Boxers - commoners trained in kung fu who fight to free China from "foreign devils."Against all odds, this grass-roots rebellion is violently successful. But nothing is simple. Little Bao is fighting for the glory of China, but at what cost? So many are dying, including thousands of "secondary devils" - Chinese citizens who have converted to Christianity.Saints: China, 1898. An unwanted fourth daughter, Four-Girl isn't even given a proper name by her family. She finds friendship—and a name, Vibiana—in the most unlikely of places: Christianity. But China is a dangerous place for Christians. The Boxer Rebellion is murdering Westerners and Chinese Christians alike. Torn between her nation and her Christian friends, Vibiana will have to decide where her true loyalties lie . . . and whether she is willing to die for her faith. 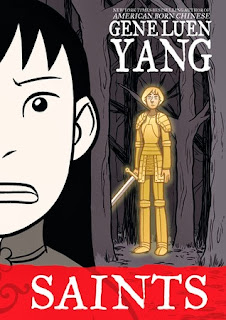 Yang has told a difficult story and he never once shied away from its complexity or its horrors. This is a bloody gruesome tale and the pictures depict that, but that is not what leaves an impression. No, it is the characters Yang is telling his story through who do that. Their doubts, fears, actions, and inaction all come together to make the reader experience what is happening. I appreciated the balance he gave the story too. He made all the characters real and true people with strengths and faults. The Chinese Boxers had a firm and true belief that what they were doing was for the good of China. Watching Bao squelch some of his misgivings about some actions as he convinced himself all of it was for a greater good, shows the struggle the people had. They wanted their country back, they were not happy with foreign influence, and they felt they were answering to a higher calling. On the flip side, Yang gave the Chinese Christians and the foreign missionaries the same treatment. Though Vibiana's story is shorter than Bao's it still depicts a clear picture of what was happening with this group. In each story you see people using the beliefs of their brethren to further their own selfish ends. In each story you see people motivated to make a change and a difference for the better. I appreciated how Yang presented the foreign missionaries as true people as well, with faults yes, but he didn't make them the problem. The soldiers in the expeditionary forces aren't treated as kindly, but historical evidence tells us they shouldn't be. (Some of the missionaries shouldn't be either, but I do appreciate how they weren't all painted with the same brush.)

I can't imagine attempting to teach a unit on The Boxer Rebellion and not using these. It would be negligent. Yang included all the main points that needed to be there, the problem with the opium trade, the influence of the weather and failed crops, the bandits who used the church as a means of bullying, life in the Legation Quarter as compared to life around it, the burning of the library at Hanlin Academy, and the looting of the expeditionary forces, and also brings the story to life giving the events and places faces to go with them and feel for. Truly excellent in every way, these are well deserving of their National Book Award nomination.