Of Beast and Beauty

November 11, 2013
"Beauty and the Beast" is my favorite fairy tale so I have a serious love/hate relationship with retelling of it. To be honest, I've never found a retelling of it to love, so more accurately a like/hate relationship. I almost returned Of Beast and Beauty by Stacey Jay to the library unread, but Christina happened to be reading it at the time and was saying good things about it on Twitter. I decided to actually read it and I'm so glad I did. Jay did a fantastic job. 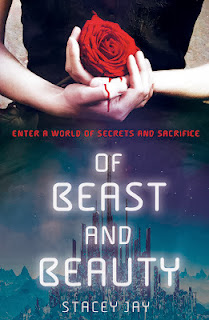 Synopsis:
In the beginning was the darkness, and in the darkness was a girl, and in the girl was a secret...In the domed city of Yuan, the blind Princess Isra, a Smooth Skin, is raised to be a human sacrifice whose death will ensure her city’s vitality. In the desert outside Yuan, Gem, a mutant beast, fights to save his people, the Monstrous, from starvation. Neither dreams that together, they could return balance to both their worlds.Isra wants to help the city’s Banished people, second-class citizens despised for possessing Monstrous traits. But after she enlists the aid of her prisoner, Gem, who has been captured while trying to steal Yuan’s enchanted roses, she begins to care for him, and to question everything she has been brought up to believe.As secrets are revealed and Isra’s sight, which vanished during her childhood, returned, Isra will have to choose between duty to her people and the beast she has come to love.

I love how Jay manipulated the main elements of the fairy tale and included them into this story. The roses in particular, are a delightful twist on the old tale. But the most interesting twist for me was her reversal of the roles. The monstrous boy is the one held captive, left as a hostage by his father to accomplish a mission, the one who leaves and almost doesn't make it back in time to save the girl he loves. The princess is the one who forces the captivity and is none to pleasant about it at first. She is the one cursed, bound to the roses and their evil.  The reversal of roles highlights the underlying theme of both story and novel, we all have the potential for both in us. Isra is a desperate girl, determined to help her cursed people, stubborn, yearning for freedom. I sympathized with her need to see and know. And her need to feel as though she had been truly useful in her life. Gem is also desperate, to help his starving people, to break the curse on the land outside the domed cities, to see life flourish again. He is manipulative and deceitful but also brave, daring and loving. The romance between them develops over time and working together in the garden. The reader does not see this take place, and this is the one part that was rather frustrating to me. However, when they are together it is plain that there relationship grew and changed and that they truly care for one another.

The world building here is fascinating with a bit of sic-fi thrown in for good measure. This is in a future where humans have populated another planet and centuries have passed. The mythology and customs that grew up out of the fear of the people and changing of the land was well done and makes perfect sense in the world Jay created. There is plenty of political intrigue thrown into the story as well. That's always going to make me happy. There are villains, separate from the evil behind the roses, but they are more nuanced than most fairy tale villains. There are shades of gray in everyone. What the villains do is wrong, but they believe they are working for the best. All of it, characters, plot, theme, tie together wonderfully to make a thoroughly enjoyable read.

Anonymous said…
Sounds interesting! Like you, Beauty and the Beast is my favorite fairy tale so I'm always intrigued when I hear about a retelling of it. Since you enjoyed reading this one, I have a feeling I'll like it too. Looks like there are plenty of things to like in it but I hope I also don't get too frustrated that the reader doesn't see the romance developing.
November 13, 2013 at 10:05 AM

Brandy said…
That was frustrating, but also fit the fairy tale feel of the novel so I was able to get over it. If the rest hadn't worked for me it would have been worse.
November 13, 2013 at 9:54 PM