The Wizard of Dark Street by Shawn Thomas Odyssey has been on my TBR since it came out. Sadly, other things keep coming up. When its sequel, The Magician's Tower, was nominated for the Cybils I decided to go ahead and give it a try anyway. At least I would know if it could stand on its own. It can and it is such a fun story I am now looking forward to reading its predecessor even more. (Come January.) 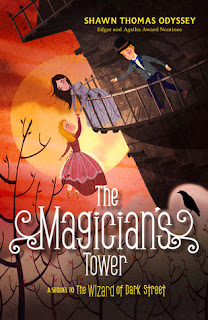 Synopsis:
Despite her extraordinary magical abilities and sleuthing skills, Oona Crate’s detective agency has failed to take off. But a new challenge captures her attention—The Magician’s Tower Contest.Held every five years, no one has ever completed the array of dangerous tasks (such as racing on flying carpets or defeating a horde of angry apes). As the competition commences, a case emerges. A rare punchbowl—one with unparalleled magical powers—has disappeared from the carnival surrounding the Magician’s Tower. If Oona can find the culprit, she could use the bowl to answer her question about her mother’s and sister’s tragic deaths so many years ago—was she really at fault?

I adore a good fun mystery, and that is what The Magician's Tower is first and foremost. It is also an adventure full of riddles and, of course, a fantasy. All things prepared to make me have quite a bit of fun with a book. And did I ever have fun reading this one. The competition is  set up in an interesting manner and watching as Oona attempts the feats and tries to solve more than one mystery at the same time is thrilling.

Oona is a wonderful main character. She is persistent, brave, clever, and also possessing of a remarkable amount of common sense. And when her common sense fails her she has a talking pet raven to remind her when its gone missing. I thoroughly enjoyed the interactions between these two characters. Oona's rival in the competition, Isadora, is a bit over the top, but that is what makes her character fun and a perfect foil. She was frightfully annoying, as she is intended to be. Oona's cursh on Adler is sweet and perfectly described for the intended age group. I quite liked  the villain as well, and was pleasantly surprised to find that I was not able to figure every piece of this mystery out before the reveal.

I enjoyed the mixture of genres and am delighted to have found another book and series I know I can get my students, many of whom also love both these things, interested in.

Jessica said…
Oooh, I love these books! You really should go back and read the first one, it's just as good! At least when you're finished with your Cybils reading. :)
November 13, 2013 at 2:07 PM