Ever After High: The Storybook of Legends

I didn't want to read The Storybook of Legends. On the one hand, it's by Shannon Hale and I often like her books. On the other, it is a commissioned series to go with a line of dolls produced by Mattel. Ugh. But it was nominated for the Cybils and then Bit found the book in the Scholastic flyer and had to have it. (She misses having a fairy tale series to follow since The Sisters Grimm has ended.) Anyway the book came to our house, we both read it, and had different reactions. 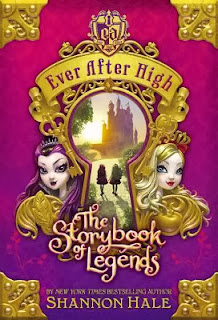 The Story
At Ever After High, an enchanting boarding school, the children of fairytale legends prepare themselves to fulfill their destinies as the next generation of Snow Whites, Prince Charmings and Evil Queens...whether they want to or not. Each year on Legacy Day, students sign the Storybook of Legends to seal their scripted fates. For generations, the Village of Book End has whispered that refusing to sign means The End-both for a story and for a life.As the daughter of the Evil Queen, Raven Queen's destiny is to follow in her mother's wicked footsteps, but evil is so not Raven's style. She's starting to wonder, what if she rewrote her own story? The royal Apple White, daughter of the Fairest of Them All, has a happy ever after planned for herself, but it depends upon Raven feeding her a poison apple in their future.What if Raven doesn't sign the Storybook of Legends? It could mean a happily never after for them both.

Bit's Thoughts
I really like The Storybook of Legends. I knew from the first page I would love it. I love stories based on fairy tales and I think it's so cute how she combined modern life with fairy tales. My favorite character is Raven. I like Raven because she is smart and sarcastic. I admire her bravery and ability to question what everyone thinks is true. I also like Madeleine Hatter. Maddie is funny and she's Raven's best friend. I really want to read more.

My Thoughts
I agree with Bit on a couple of her points. Raven is a wonderful heroine. She is brave, smart, questioning, and a bit of a rebel. Her desperate desire to write her own story and not be her mother's daughter combined with the thrill she sort of gets when she realizes the potential of her power make for a nuanced and layered character. Maddie Hatter is a great friend and supporter to have on her side too. She is the kind of friend anyone would want to have on their side. Apple White, the girl Raven is destined to poison, is a perfect foil for Raven. I think we are supposed to consider both of them protagonists, but I just couldn't do that. Apple works as a foil, highlighting Raven's different personality traits and filling in her character. She doesn't stand on her own as much of a character yet. The story Hale tells here is, at its heart, a good one. I love the themes of questioning tradition, self-discovery, independent thought, and courage that play out in the course of the plot.

My main problem with the book was how formulaic it was. How it clearly was set up to sell a product. The inner workings of the world building here make little sense if examined too closely. All these characters kids are almost the exact same age or close to it. And shouldn't there be quite a lot of incest and marrying of cousins happening amongst the Royal set since they keep reliving their parents stories? Yet few of the princes and princesses are actually related. Where are these people coming from? Another thing that bothered me, as much as it enchanted Bit, were the working in of modern pop culture. The kids have "mirror pods" and listen to "Tailor Quick" and "One Reflection" singing "You Don't Know Your Charming". (My eyes almost got stuck in my head I rolled them so hard.) It also overuses cutesy phrases. Text becomes Hext in every usage. "I'll  hext you later!" "I lost my hextbook."

Given what this is, it is done as well as it could be I think. I asked Bit if she wanted to participate in this review to highlight how the target audience is eating it up. Most of the girls on Bit's swim team discovered this over their fall break and everyone was talking about it at practice when they returned, delighted that they had found it and that their friends had read it too. (These girls range in age from 9 to 12. Target demographic achieved.) I would have loved this as a kid too I think, and it will certainly be a thing. I truly hope that reading this series will push girls to read Hale's other books too, which have the same strong heroines and amazing themes but with fewer plastic sparkle components.

Brenda said…
Thanks for the shared review, it was nice to see the different perspectives.
November 19, 2013 at 1:01 PM

Liviania said…
Definitely a good one for both sides.

Brandy said…
I think it would have been funnier to me on its own. Combine with all the other hexting it just drove me nuts. That definitely was its best usage. :)
November 21, 2013 at 9:35 PM