November 04, 2013
Traditionally the books of the inter-galactic battles and alien politics a la Star Trek have not been my thing. At all. That seems to be changing though. I'm becoming more enamored with them, and The Planet Thieves by Dan Krokos was such a book that grabbed my attention instantly and held it all the way to the end. 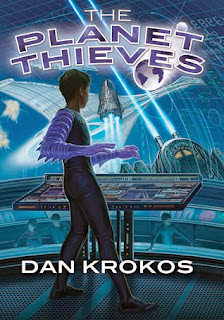 Two weeks ago, thirteen-year-old Mason Stark and seventeen of his fellow cadets from the Academy for Earth Space Command boarded the SS Egypt. The trip was supposed to be a short routine voyage to log their required spacetime for summer quarter.
But routine goes out the airlock when they’re attacked by the Tremist, an alien race who have been at war with humanity for the last sixty years.
With the captain and crew dead, injured, or taken prisoner, Mason and the cadets are all that’s left to warn the ESC. And soon they find out exactly why the Tremist chose this ship to attack: the Egypt is carrying a weapon that could change the war forever.
Now Mason will have to lead the cadets in a daring assault to take back the ship, rescue the survivors, and recover the weapon. Before there isn’t a war left to fight.

The Planet Thieves makes use of that most popular of MG literary devices: something goes horribly wrong and it is up to the kids to save the day, the universe, and the adults. There is a reason this device is so popular. It works. Kids love this idea. Krokos made good use of it in this book and turned out a story full of adventure, peril, and intrigue. There are great battles, one on one combat, and the greater conflict of negotiating a high stakes adult situation as inexperienced youngsters. The concept of warring species fighting over the same world is not a new one either, but Krokos gives it a fresh voice and some delightful spins.

The character development is a bit sketchy. There is so much action going on from the very first page that there is not much space for it. Mason is certainly a likeable hero, one who also has his fair share of faults. And he does grow over the course of the book from a reckless prankster to a strong leader. His character certainly shines out above the rest. I did thoroughly enjoy the supporting cast, but felt like many of them were there as plot devices rather than actual people. This is the case with Mason's best friend Merrin. I wanted to see her fleshed out more. She is integral to the story and yet I never really got a full sense of who she was as a person. I'm hoping this will be different with the second book.

The Planet Thieves is an exciting adventure story perfect for anyone interested in this type of story. I know several of my students will love it. It is the first in a series. The second book is scheduled for 2014.