May 10, 2012
Who out there knew there was a race riot in Wilmington, NC in 1898? If you did not know this and you have never set foot in NC then that is understandable. I however lived in NC for 10 years and didn't know. I took a class on NC history in college and IT NEVER CAME UP. I want my money back. My husband was born and raised in NC and he didn't know either. Thankfully Barbara Writght wrote Crow so hopefully more people will be aware of this interesting event in the history of our country. It also has the bonus of being all around awesome. 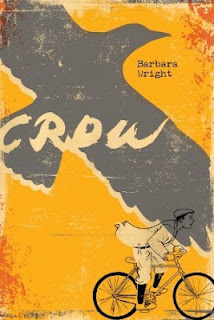 The summer of 1898 is filled with ups and downs for 11-year-old Moses. He's growing apart from his best friend, his superstitious Boo-Nanny butts heads constantly with his pragmatic, educated father, and his mother is reeling from the discovery of a family secret. Yet there are good times, too. He's teaching his grandmother how to read. For the first time she's sharing stories about her life as a slave. And his father and his friends are finally getting the respect and positions of power they've earned in the Wilmington, North Carolina, community. But not everyone is happy with the political changes at play and some will do anything, including a violent plot against the government, to maintain the status quo. One generation away from slavery, a thriving African American community—enfranchised and emancipated—suddenly and violently loses its freedom in turn of the century North Carolina when a group of local politicians stages the only successful coup d'etat in US history.

Yes, this book is about important things and I will get to that, but for me what made it were the characters. Some might think this book starts out slow. If plot is what drives a story for you the episodic nature of the beginning could be frustrating. Character is what drives a story for me and all those episodes were brilliantly revealing all the layers of the main characters. Moses is such an 11 year old boy. His thoughts, the things he says, the things he does all demonstrate this. I loved the way he wanted to be all his family wanted him to be, but also struggled with remorse when he thought he wasn't. I loved that he made some terrible decisions that are realistically reflective of the mindset of someone his age. Boo-Nanny is oh so wonderful too. Wright wrote everything about her pitch perfect from the way she spoke to her cynicism about the white community to her love for her family. Moses's parents, Jack and Sadie, are also fully realized characters. Jack is college educated, a writer, and in politics. He is idealistic and wants the world for his son. Sadie is a housekeeper for a wealthy white family. She was born into slavery, loves to play the piano, and desires to learn as much as she can. The dynamics in this family are as much a story as the historical context. My favorite scenes in the book are when they are interacting over the dinner table, whether they are talking about music or the threatening times. Wright made me love them all which made the historical events that much more real and threatening.


The episodic nature of the beginning also did an incredible job of giving the story a specific sense of time and place. The Wilmington I was once so familiar with was overtaken by the Wilmington of 1898. Wright's descriptions and the scenes playing out from the story put the reader right there where everything is happening.


We don't get a whole lot of African American historical fiction that doesn't focus on Civil War era slavery or the Civil Rights movement. That Crow focuses on Reconstruction and Jim Crow make it  unique enough, however this also stands out as being historical fiction the way it should always be done. Wright depicts the time period realistically and no one acts or thinks anachronistically. The realism of the book is what sucks the reader into the story and holds them until the end. Unfortunately there are probably some people who aren't going to appreciate that aspect. Wright didn't pull any punches and tells it like it is. The vocabulary is exceedingly accurate and wince inducing. Yes, the "n" word is used, as are other derogatory terms. Lynching is talked about and allusions to rape are made (though neither is fully explained-much to Moses's frustration). I take my hat off to all the people involved in the creation of the book, Wright and her editors, for having the courage to tell it like it was. The events depicted in the last half of the book blew me away. That synopsis exaggerates not at all when it says there was a coup d'etat, and that every law this nation holds sacred and dear was toppled over in the name of white supremacy.  This is something that all Americans should know about. Barbara Wright has posted some interesting photographs of the time on her website.


Here is a scene that encompasses all I loved about this book. the history, the family dynamics, Moses himself (he thinks exactly like a kid in the scene):
Daddy took a deep breath. "Well, Mrs Felton thought that white men needed to do a better job of protecting their women in the countryside from the, um, unwanted attentions of black men."
"That doesn't sound so bad," I said.
"She was talking about violent attentions."
"You mean rape?" I asked.
Mama gasped
"Do you know what that word means?" Daddy asked.
I shook my head no.
"Well, it involves unwanted sex..."
"Hush up. That ain't no thing for young ears," Mama said.
"He deserves to have his questions answered." Daddy said.
"Jackson..." When Mama gave Daddy that dark look and drew out the syllables in his name I knew she would not be refused. She turned to me and said, "Run along now, Moses. You be excused."
There was no reason to treat me like a child. I knew about sex; Lewis had told me. Men and women got together and had sex and made babies. Lewis's next-door neighbor, a white woman named Mrs. Roberts was a sex maniac, because she had six children and had done it six times.

I do think it fits best in a middle school due to the  maturity of the humor and the prose. I am ecstatic that I have found the perfect book to help teach this time period when my kids are studying it as 6th graders.