Upon finishing our last read aloud , 100 Cupboards, Bit was anxious to begin its sequel, Dandelion Fire. 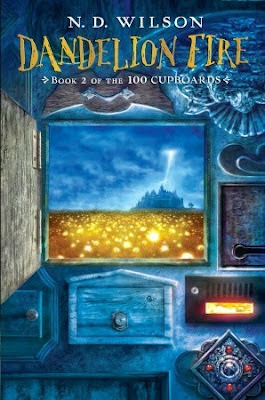 The Story
Dandelion Fire picks up where 100 Cupboards left off. The Willis family is recovering from their adventures with the cupboards and Henry is trying to make sense of all he learned about himself and what is coming in his future. Then an inexplicable encounter with a dandelion changes Henry for good and his connection with the cupboards isn't over. Nimiane, witch queen of Endor, wants his blood. There is a strange deranged wizard intent on making him his son. There are some grumpy Faeren intent on silencing Henry for good. And then there is his family who he has to find before it is too late.

Bit's Thoughts
I liked the book so much I don't know what to say. I like how Henrietta changed how she acted and started thinking about others more. I thought the plot was interesting because it switched back and forth between characters. Except it always switched at the most interesting places. Henry made a lot of interesting discoveries like having the second sight which I think is cool. I'm going to read the next book on my own.

My Thoughts
Dandelion Fire is my favorite of Wilson's works of fiction and much of that has to do with the nature of Henry's second sight and what it is he sees when he uses it. I also enjoy how Wilson pieced the plot together so intricately. He does switch between characters at the most inconvenient times for a reader's peace, but it certainly keeps one wanting to read and read. And read some more. And then there is the beauty of the prose itself and the intricacy of the world building. It is just well crafted in every way from beginning to end. Adults out there who have read Wilson's non-fiction work, Notes from the Tilt-a-Whirl,  will find may parallels between the two. Much of what Wilson builds in that book he incorporated into the world of this one. Very Lewis like that.

As Bit said she wants to try the third installment of this trilogy on her own. So the next book she and I are reading together is: Harry Potter and the Goblet of Fire by J.K. Rowling.

KateCoombs said…
I came to this series kind of late and really fell in love with the books. They're a little dark, but still MG and just so well done.
June 2, 2012 at 9:13 AM

Brandy said…
He definitely doesn't mind making his heroes feel pain. They truly suffer. Though I think his new series is even darker.
June 7, 2012 at 3:19 PM