May 16, 2012
Something Like Normal by Trish Doller is a book that intrigued me since I first heard of it. I liked the idea of a book that shows soldiers returning from war dealing with the aftermath. Then I read Trish Doller's post during Marchetta Madness and became even more interested. 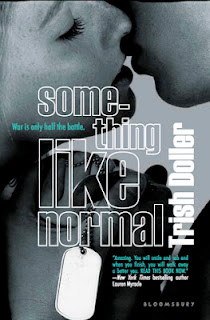 When Travis returns home from a stint in Afghanistan, his parents are splitting up, his brother’s stolen his girlfriend and his car, and he’s haunted by nightmares of his best friend’s death. It’s not until Travis runs into Harper, a girl he’s had a rocky relationship with since middle school, that life actually starts looking up. And as he and Harper see more of each other, he begins to pick his way through the minefield of family problems and post-traumatic stress to the possibility of a life that might resemble normal again. Travis’s dry sense of humor, and incredible sense of honor, make him an irresistible and eminently lovable hero.

I have to say that for the first half of the book I was nervous I wasn't going to like it as much as everyone else has so far. I was loving the themes and setting, but something was keeping me from completely loving the characters. I felt distant from Harper and flat out didn't like Travis. I felt sorry for Travis and wanted him to get help for his obvious PTSD, but I didn't like him. Or so I thought. Upon reflection I have decided what I was really worried about was where the plot was going. I distanced myself from the characters because I was worried all of the plot elements were going to culminate in one of those overly dramatic YA novel Misunderstandings where the two main characters end up in some fight that could have been avoided if they had been honest and not acted like toddlers . I could have done a dance when the plot resolved itself in the exact opposite way. Yay for characters who act their age! Travis makes some seriously bad decisions at times, but the way he responds to the knowledge of those mistakes makes his character. And he is wonderful in all his messed up glory.

My favorite thing about this book is that it tells a story of many real people that needs telling simply by focusing on one individual and all the complexities of his life. By letting us into Travis's head, Doller has given us a sense of what many young men we come in contact with regularly are going through. The mindset of soldiers returning home from war is one that needs to be addressed. This country is not serving well in so many ways those who serve us so well by risking their lives in our armed services. Travis's story is one that is playing out in cities and towns all across our nation. Travis's unwillingness to admit he needed help for fear of what acknowledging such a weakness would do to his career is such a real concern for these guys. I confess my favorite parts of this book weren't the scenes between Travis and Harper, as lovely as those are, but between Travis and his fellow Marines. It was a snap shot into a world I have never been and will never be a part of, and I was grateful for the view of it I was given.


Note on Content: I also should say that despite the sexiness of the cover this is not one of those books. If that is a concern that might keep you from reading it know that while it is clear sex is being had it is not described. The language in the book is reflective of the mc being a 19 year old Marine.

I read a copy of this made available via NetGalley. It will be in stores on June 19th.

Brandy said…
It is pretty good, particularly for a debut novel.

Chachic said…
So glad you ended up liking this! I thought you wouldn't based on your Goodreads update but I'm glad SLN changed your mind. Hmm come to think of it, you're right, the kissy cover doesn't really represent the book because the love scenes are fade to black.
May 16, 2012 at 11:14 PM

Brandy said…
The cover definitely captures the wonderful almost there tension that exists between Travis and Harper BUT...if you read books with covers like that for the sexy times you will come away disappointed. If you try to avoid books with the sexy times the cover might be off putting. So ultimately I'm not really sure what they were going for.

Interesting you used the phrase fade to black to describe the love scenes. With Harper they are. With Paige they are more like blackouts-which I really liked because it did show exactly how little Travis was trying to think about anything and block out the world.
May 18, 2012 at 9:41 AM