Notes from an Accidental Band Geek

May 26, 2012
Notes from an Accidental Band Geek by Erin Dionne is a book I wanted to read because, I'm not going to lie, I was a band geek. Even after I quit band and wasn't in it anymore I was still a band geek. That's where all my friends were. It's like the mafia. Once you're in, death is the only way out. 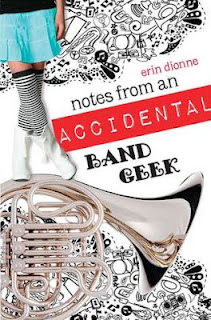 Synopsis (from Goodreads):
Elsie Wyatt is a born French horn player, just like her father and her grandfather before her. In order to qualify for the prestigious summer music camp of her dreams, she must expand her musical horizons and join - gasp! - the marching band. There are no French horns in marching band (what the heck is a mellophone??), but there are some cute boys. And marching band is very different from orchestra: they march, they chant, they . . . cluck? Elsie is not so sure she'll survive, but the new friends she's making and the actual fun she's having will force her to question her dad's expectations and her own musical priorities.

If you aren't or weren't in band much of this novel will be meaningless to you. You will wonder why these people do what they do. Why on earth would you do something that makes you pass out (band camp-she locked her knees) and come back the next day? What is a drill formation? What does any of it matter? There was also a lot of time spent on the tension between Elsie's marching playing and her concert playing. Having been a person who played in a band that did both competitively there is a big difference.  There is a totally different mindset and technique and when you are a perfectionist like Elsie is who wants to impress her Boston Symphony Orchestra father it's a big deal. People who don't get musical performance might not understand why-you play the instrument standing, you play it sitting-so much time is spent on Elsie's obsession over time to practice her concert and classical pieces.

I enjoyed it lots. It was a fun quick read and I liked how Elsie was a very flawed character. She is incredibly self absorbed and manages to alienate people a lot. But she is also vulnerable and terrified of failure making her sympathetic.

This book reads a lot like Dionne's earlier novel The Total Tragedy of a Girl Named Hamlet (my review). It has many of the same elements but I believe they were better executed here. If you know young people who enjoyed that they should enjoy this as well.


Note on Age: Elsie is a freshman in high school but this is most definitely a middle grade level book. There is a dance, a first crush and a first kiss but nothing that makes this YA. Some teens may enjoy it simply for the band experience so I'm labeling it as both.