May 02, 2012
Icefall by Matthew J. Kirby is a book I have had my eye on for a while. It is excellent historical fiction full of mystery, treachery, and deceit with Vikings and berserkers. I love when books are set in different times and places we don't have an overabundance of books about. So much the better when they are as well written as this one. 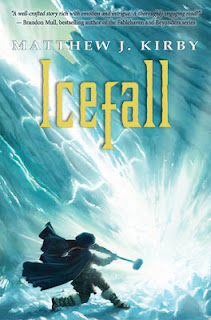 Synopsis (from Goodreads):
Trapped in a hidden fortress tucked between towering mountains and a frozen sea, Solveig, along with her brother the crown prince, their older sister, and an army of restless warriors, anxiously awaits news of her father's victory at battle. But as winter stretches on, and the unending ice refuses to break, terrible acts of treachery soon make it clear that a traitor lurks in their midst. A malevolent air begins to seep through the fortress walls, and a smothering claustrophobia slowly turns these prisoners of winter against one another.
Those charged with protecting the king's children are all suspect, and the siblings must choose their allies wisely. But who can be trusted so far from their father's watchful eye? Can Solveig and her siblings survive the long winter months and expose the traitor before he succeeds in destroying a kingdom?

Solveig suffers from middle child syndrome in the worst kind of way. Her older sister is beautiful and valuable to their father in the marriage she may make. Her younger brother is the heir. She is plain, unhelpful, and unnoticed. As the story moves on Solveig comes to see she has valuable strengths that she can use to carve a place in the world for herself. I love stories like this, where the character embraces who they are and uses that rather than trying to become something they are not. I loved how Solveig came to see herself as worthy and began to care less about how others saw her. She is brave, smart, and talented and uses all of these to save her companions from the treachery they are facing. I enjoyed the sibling dynamic of the story as well and thought it played out very realistically.

I particularly enjoyed the way the setting reflected Solvieg's feelings and mood. The frozen cold of winter, the thawing, the breaking, and renewal. This parallel was subtle and done very well. The language is wonderfully descriptive:
"I sit down. I don't want t o cry anymore, so I keep my thoughts away from Hilda and listen to the ice. It speaks to me of scouring winds, of cloudless nights, of endless cold. It measures its loneliness by the weight of its layers, the years and years of snow falling unobserved. I've been told its lament is the loudest at the beginning of winter and the coming of summer, as if it knows that is the closest it will ever come to warmth and thaw. As if it yearns for its own demise. But it can will be only what it is, bleak and alone, until the breaking of the world."
This language could have been too much and overdone but Kirby uses it sparingly. The result is that when he does it packs a punch and drives a point home.

The mystery was not a terribly difficult one to unravel (though it will be harder for a young reader) but I did enjoy watching the interactions between the people as it all unfolded.

Icefall was a finalist for this year's Cybil Awards in the category of MG science fiction and fantasy. I feel like calling this a fantasy is a bit of false advertising. It is fantasy in the same type of way one might classify Holes by Lois Sachar or Jellicoe Road by Melina Marchetta as fantasy. Which is to say I wouldn't. I'm clearly in the minority on this but I believe it is more accurately labeled as simple historical fiction. Of course it is also a mystery as its recent Edgar Award  proves.

Nitpicky genre discussions aside, this is a book that will appeal to any who like stories with brave protagonists,  mystery, action, and adventure.