Dark of the Moon

May 08, 2012
The myth of the labyrinth and the minotaur has always been a favorite of mine, which is why it is embarrassing to admit that I have never read The King Must Die by Mary Renault. It is, after all, supposed to be the quintessential novelization of Theseus. I think I have built my expectations of it so high I'm afraid to read it in case it doesn't live up. I did intend to read it before I  read Dark of the Moon by Tracy Barrett., but then I saw Dark of the Moon sitting so enticingly on the new arrival shelf at my library and I couldn't resist it.

Ariadne is destined to become a goddess of the moon. She leads a lonely life, filled with hours of rigorous training by stern priestesses. Her former friends no longer dare to look at her, much less speak to her. All that she has left are her mother and her beloved, misshapen brother Asterion, who must be held captive below the palace for his own safety. 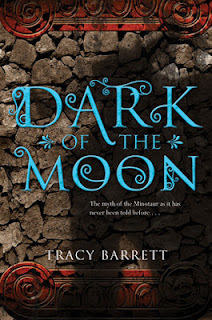 So when a ship arrives one spring day, bearing a tribute of slaves from Athens, Ariadne sneaks out to meet it. These newcomers don’t know the ways of Krete; perhaps they won’t be afraid of a girl who will someday be a powerful goddess. And indeed she meets Theseus, the son of the king of Athens. Ariadne finds herself drawn to the newcomer, and soon they form a friendship—one that could perhaps become something more.
Yet Theseus is doomed to die as an offering to the Minotaur, that monster beneath the palace—unless he can kill the beast first. And that "monster" is Ariadne’s brother . . .

This is an excellent novelization of the minotaur myth. I loved how Barrett took the familiar and changed it just enough to give it depth and believability.  For those who are familiar with the myth, you will find all the essential elements of the original story: the tribute, the yarn, the maze, the "monster", Minos. Daedalus and Icarus are both mentioned. I enjoyed the glimpses we had of Medea as well.  All readers will find in Barrett's Krete a world fully realized and developed. A very intricate religious system governs the lives of Krete's inhabitants ruled by She-Who-Is-Goddess, the human manifestation of the moon goddess. This system involves yearly human sacrifice to ensure the harvest. Ariadne is She-Who-Will-Be-Goddess, daughter of the current goddess and one of the yearly sacrifices.

The story is told in alternating viewpoints between Theseus and Ariadne. This is all Ariadne's story though. Theseus, while starting off interesting, is not well developed and seemed to only serve to further Ariadne's character. Ariadne is realistically torn about her role in Krete. She is confused and lonely. Through her interactions with Asterion we see her as loving and strong. Her loneliness makes her an easy target for those who want the ways of Krete to change and she leaves herself vulnerable in ways that cause her much distress. In this version her actions take on new meaning and understanding. She has what the Ariadne from the myth was lacking, power to determine her own actions and end. She is not the girl who has her head turned by a charming hero and betrays her people only to be abandoned by said hero to fend for herself. This Ariadne grows in strength, power and knowledge of who she is. I thoroughly enjoyed this novel for what it did with her character.

If you are a fan of mythological retellings this is definitely a must read.

Chachic said…
This one's already on my wishlist and it's good to know that you enjoyed reading it! I want to read The King Must Die firs since I already have a copy of that but I'll keep this in mind because I enjoy reading mythological retellings.
May 9, 2012 at 2:52 AM

Brandy said…
I really need to read The King Must Die. I love it when an author tries to bring something different to a retelling, which this one does.
May 9, 2012 at 3:25 PM

Charlotte said…
Both of you must go read The King Must Die (one of my top ten favorite books!) The Dark of the Moon was a powerful story in its own right though!
May 9, 2012 at 6:08 PM