May 27, 2013
Doll Bones is a new Middle Grade title from the talented Holly Black. It is, thus far, my favorite MG read of the year. It is a genre busting title that covers horror, suspense, mystery, and the supernatural. Or it could be a plain old contemporary realistic novel. It is all in how you look it at.

Doll Bones follows three twelve year olds who have been friends for years. 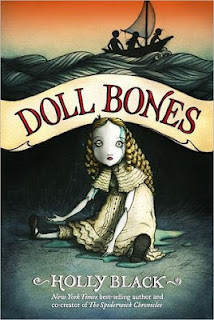 Zach: He is a talented basketball player and has recently attracted the interest of the cool kids and girls in his middle school. He doesn't want anyone to discover he still plays with action figures with his two friends who are girls, but he also loves it and doesn't want to give it up.

Alice: She is a drama girl who loves theater and acting and uses it to escape from her domineering grandmother, who is her guardian. She uses the game with her friends for the same thing and has created ever more dangerous and reckless characters who take the risks she is afraid to take herself.

Poppy: She is the youngest of a group of delinquent siblings. Her house is always a mess and her parents have quit trying to maintain order. It is her house the other two come to for their game, and it is Polly who is the diabolical thinker who comes up with all of the games danger and adventure. It is why she often plays the part of villain.

The game is complex. These kids created an epic imaginary world culled from tales and myths they read. Into it they placed characters who have real lives and histories. Over this world rules the Queen in her glass tower, an antique china doll belonging to Poppy's mom and locked in a cabinet to keeep her safe. They are invested in their game and everything it entails. Until one day Zach tells the girls he doesn't want to play anymore. Then one night the girls show up and tell him a horrifying story. Poppy released the Queen from the tower hoping she could convince Zach to keep playing. Now she is having dreams about a girl who was murdered. A girl whose bones were ground up and made into a china doll. She is demanding a proper burial in the cemetery in her home town. And she wants Poppy, Zach, and Alice to take her there.

All three characters are vivid, layered, and interesting. The story is told in third person from Zach's perspective so it is his thoughts and struggles the reader is most connected to. However, the girls' struggles are also depicted through Zach's interactions with and musings on them, even if he doesn't understand all of what he is seeing. The struggle here between childhood and emerging adolescence is rendered so well. It is happening gradually, yet faster than any of them would like, particularly Poppy who feels like she is being left behind by the other two. There is the struggle to hold on to the things that are most familiar as everything seems to be changing too fast. Yet there is an excitement and anticipation about the changes as well, at least in Zach and Alice. This is a story any middle school kid will find themselves in, they all have this same struggle.

Then there is the creepy horror part of the story. And creepy it is. Is Poppy messing with the other two? Spinning a yard to keep them playing the game, keep them attached to her? Or is the Queen really the ghost of murdered girl named Eleanor who is forcing the three to do her bidding by scaring the pants off of them? Black laid out her plot perfectly, setting down each event to keep the reader wondering, asking. Everything that happens to the kids can be logically explained, and Zach and Alice do logically explain it all. And yet...the creepiness is there.

The writing here is phenomenal. The pacing keeps the reader engaged from start to finish. The phrasing is engaging and simple, but layered with meaning at the same time. The kids are equal parts relateable and unlikable. They are so real. The theme of growing up, changing, moving on, learning to adapt are woven into the story so perfectly that anyone who is or has experienced adolescence will get the character's struggles. At the same time it also funny. When you add in the sense of mystery, intrigue, and horror, you have a book that is impossible to put down until you have reached the last page.

Some of my favorite quotes:
Sometimes it seemed to him that girls spoke a different language, but he couldn't figure out when they'd learned it. He was pretty sure that they used to all speak the same language a year ago.

In stories, orphan boys became assistant pig keepers and magician's apprentices. In real life, he wasn't sure there were many equivalent jobs.

He wondered whether growing up was learning that most stories turned out to be lies.

Also, it wasn't like they were walking through the awesome vistas of Middle Earth- a forest full of Ents or elves, a mountain pass brimming with orcs and ice-they were mostly walking past industrial buildings and a bowling alley.

It's not fair. We had a story, and our story was important. And I hate that both of you can just walk away and take part of my story with you and not even care. I hate that you can do what you're supposed to do and I can't. I hate that you're going to leave me behind. I hate that everyone calls it growing up, but it seems like dying. It feels like each of you is being possessed and I'm next.

Charlotte said…
I just reviewed this too! I love the quotes you picked--I quoted a big chunk from the end, because it was such a very nice end.

Brandy said…
It was a very nice end.

Anonymous said…
I am really really (really) looking forward to reading this. Huge Holly Black fan. Thanks for such an in depth review. This is a _must_ get.
June 2, 2013 at 10:56 AM

Brandy said…
It is a must get. I have absolutely no regrets about buying it rather than waiting for my library!
June 2, 2013 at 12:15 PM

Anonymous said…
That cover is so unbelievably creepy! I'm not usually one for horror, but this sounds so fascinating. I love stories about a struggle with coming-of-age, and I love the idea of the imaginary world (maybe) coming to life. Explorations on the power of story are so intriguing.
June 4, 2013 at 8:49 PM