November 13, 2014
I'm way behind. I know. I bought Cress by Marissa Meyer when it first came out and I was so excited, but I was also swamped with review books. Then something strange happened. I became less excited and more wary of reading it. It is so long. And it has been my experience that books don't typically need to be that long. So it kept getting put off. Finally I was in the perfect mood for it, I guess, because I didn't want to put it off anymore. Yes, it's too long in a way that required more editing. Yes, there are some issues. But it is also a whole lot of fun. 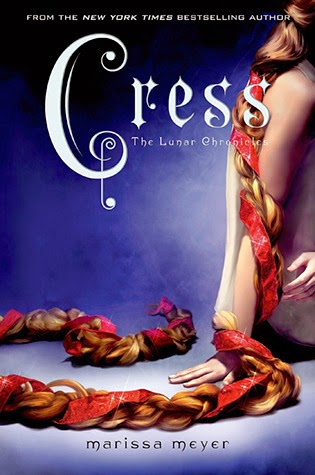 Cress has lived for seven years on a satellite hacking into Earth's computer systems for Mistress Sybil and Queen Levana. Her latest job is to track down the Rampion carrying Cinder, Thorne, Scarlet, and Wolf. She did this, and then immediately scrambled their signal and has since been protecting them from capture while lying to Sybil about her ability to find them. Cress has also been studying up on the occupants of the Rampion and has developed a moon size crush on Captain Carswell Thorne. When the fugitives contact her for help, they discover her situation and decide to rescue her. Except the rescue goes horribly wrong and now they are all separated and in different sorts of danger. Thorne and Cress crash land in the desert. Cinder and Wolf go to find Dr. Erland. Scarlet is taken captive. While all this goes on, the royal wedding between Emperor Kai and Queen Levana draws ever closer. A wedding that must be stopped if Levana is ever going to be ousted from power.

My favorite thing about these books is that Meyer has taken fairy tale heroines and made them into heroines who do science. A mechanical engineer, a pilot, a master hacker and programmer, these aren't the typical female protagonists in fairy tales, but we could definitely use more of them. And I kind of love how both Cinder and Scarlet have their respective men wrapped around their fingers and pining for them as we usually only see girls do for the hero. Cress has a different sort of story. She has been alone for so long and knows little about human interaction and socialization, particularly of the romantic sort. Her massive crush on Thorne, built entirely on her own assumptions from reading a few reports on his life, is understandable and so sad at the same time. Some of the conclusions she jumps to about his character as a result of what she reads of the "reasons" for his various misdeeds left me like:

As for Thorne himself...well. Let's just say that a lot of my love for him in Scarlet came from what I was hoping he would be. Kind of like Cress. Huh. WELL DONE, Ms. Meyer. The reality of Captain Thorne is a tad disappointing. Yes, he's dashing. Yes, he's snarky. Yes, he has that whole devil-may-care attitude. But I wanted him to develop more substance. I wanted him to be more. Cress is less upset about this than I am, but I rather liked where they end by the finish of the novel. I kind of hope she finds some other guys to date and lives a little first though. (Ummm....assuming they survive book four.)

I did enjoy the further development of the other characters, though I feel this book was light on Scarlet and Wolf (but they're my favorites so that may just be me). I'm still rolling my eyes at Kai a little bit. Cinder is still awesome, and I enjoyed how this book showed her strain more than the others really have. And Dr. Erland is just the best. I also loved the intro we had to both Winter and Jacin.

I really love these characters. I wish they were developed a bit more. These books are so plot heavy, and that is what they have to be for the story they are telling, but I will say that all starts to get more unwieldily in Cress. There is so much going on, and it's happening in five different places. There is a lot of jumping around and it's not at all smooth. There is a bit too much time spent on conversations and descriptions that are unnecessary, while I feel like there's other things missing that should be there. And I had a hard time buying how easily Thorne was able to get around and do things given his particular injury from the crash landing. Really??? I feel that these books may be suffering from being rushed into print to keep the hype going and not getting the full editing they truly deserve. It makes me sad because I do love these characters and the concept, but feel like the whole thing could be so much more than it is.

I'm very much looking forward to how things turn out in book four, which we still have a year to wait for. (Starting to appreciate that I waited to read this.) In the meantime there will be a bridge novel about Levana coming out in January called Fairest. I will admit to concerns that the characters I love the most are the expendable ones.