November 24, 2014
Fantasy boarding schools are nothing new. They weren't even new when Harry Potter was published. But certainly trending and hot right now are Fantasy boarding schools where a fairy tale tradition is somehow incorporated into the world-building. Pennyroyal Academy by M.A. Larson is the latest such book and is a fun inventive take on the concept. 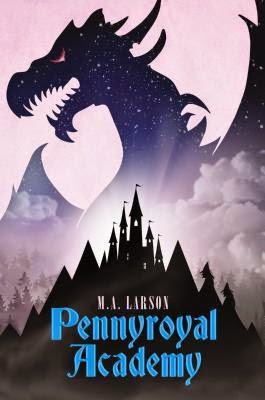 A young girl completely lacking memories of her past except a few snatches here and there, not knowing even her name, is in an enchanted forest with naught but an advertisement stating all people, even those of common blood, may apply to be cadet Princesses and Knights at Pennyroyal Academy. Unfortunately she ends up in the house of a witch. Fortunately a knight candidate is on hand and they manage to rescue each other. Arriving at the school, the girl is given the name Cadet Eleven, Evie to her friends, and embarks on her education to become a Princess. But being a princess is a different reality than many were expecting. For it is the destiny and occupation of a princess to fight witches, a reality that is terrifying as a band of powerful witches is sweeping over the countries destroying one after another. As the reality of the war she has stumbled into is made clear to Evie, she needs to make some tough decisions about the road ahead. A task that becomes even harder as she is faced with her resurging memories, a most unpleasant fellow cadet, and the strange effect she has on one of the knight cadets.

I quite enjoyed the world of Pennyroyal Castle. Of all the fairy tale boarding school books to come out recently, this is definitely my favorite. It doesn't have the internal logic problem of Ever After High or the multiple issues I had with The School for Good and Evil. At Pennyroyal girls are trained to be princesses to fight witches. (Except in Evie's year there is a groundbreaking boy princess candidate.) Boys are trained to be knights to fight dragons. The school runs like a military academy with fairly godmother drill sergeants. The princesses frequently yell the four traits every princess must have to succeed in the war against witches: Courage. Compassion. Kindness. Discipline. I love all of it. The classes, the challenges, the obstacle courses, the partnerships with the knights: all of it creates a very real world and an interesting one at that.

Evie is an excellent heroine, though one it is tough to connect with at first as she has no memory that includes no name and is rather quiet and reserved. There is enough mystery there that I was engaged from the start. And Evie's growth through the book is wonderful. There are times when switches and revelations happen a bit too abruptly. So abruptly it forced me to reread several pages. However that is a minor complaint in the face of the delightful characters and unique setting. Evie's friends, a few fellow princess cadets and the knight cadet she meets at the beginning (Remington) form an excellent team and are wonderfully supportive of each other. I thought the relationship between Remington and Evie had exactly the right amount of romance for a MG book, enough to keep fairy tale lovers happy, but not overwhelm those who don't wish for that aspect in their books yet. I kind of adore Remington as a character too and am very much looking forward to future installments of this series.

The plot mostly revolves around Evie figuring out who she is and setting up the world. It has several lovely twists, a couple I guessed but most I did not. It is just a lot of fun and recommend it to anyone who loves fantastical boarding schools, magic, and fairy tales.