November 03, 2014
The Boundless by Kenneth Oppel is a fun adventurous story that is historical fantasy of a time we don't see often. 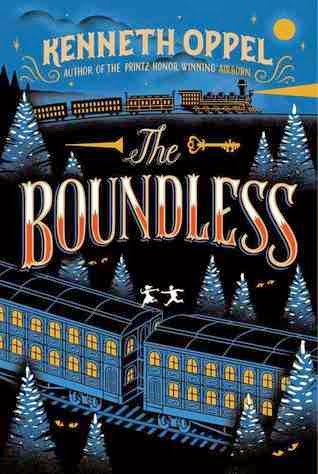 Will's father was a train brakeman and worker on the transcontinental railroad in Canada. Will pores over his father's letters seeping up all the adventures he's had, including an encounter with a Sasquatch. When Will is finally reunited with his father the day the railroad is finished, an accident causes a tremendous reversal in their fortunes and Will's father eventually runs the rail company taking the new and innovative train, The Boundless, for its maiden run across Canada. But there are those who feel they were cheated in the building of the railway, and they want their due. These villains are willing to risk anything including the lives of the passengers and any worker who stands in their way to get it. Will ends up witnessing a murder and with one of the two keys that access the car which holds the great treasures The Boundless carries. Hiding out among a traveling circus on the train, Will must make hard decisions about who to trust, how far he's willing to go to protect the treasure, and come to terms with where his future is headed. Does he become the company drone his father wants him to be or does he make his own path?

I enjoyed how Will is not the stereotypical fantasy hero. He is a talented artist and decent human being, but for the most part he is an ordinary boy who always feels like he's watching life happening around him. He sees the stories, he's never a part of them. He longs for more. After the reversal in his family's fortunes, he went from being a starving urchin to an educated and polished young man. He longs to go to art school, but his father wants him to begin as a clerk with the railway. Will reluctantly knows that he will cave to his father's wishes. Once the action really gets underway, it isn't so much Will's intrinsic bravery as his survival instinct that keeps him going. He also has a keen sense of right versus wrong though, and he desperately wants to do what is right and be stand-up sort of man. As a foil to Will, we have Maren, a tightrope walker with the circus. Maren is a determined girls with plans and sees nothing wrong with bending certain rules and laws to make those plans happen. She does defy gravity on a regular basis after all. Her courage, gumption, and survival skills inspire Will while his loyalty, conviction, and trust move her. They make a great team. Mr. Dorian, the circus master, is the most fascinating character in the book to me. Also not above bending rules, he isn't even likeable most of the time, yet he hides Will, provides for his workers well, and commands their loyalty. He is not without honor even when he goes about attempting things not quite honorable. I really liked the duality of his character, which is in all ways a lighter variation of another great literary character bearing the same name.

The book is an alternate history in which Sasquatch and creepy swamp witches exist and attack humans. There is also the sort of technology that can make a miles long train stay together as it travels across a continent. The combination of this alternate history and the historical setting make for an adventurous and fun read. It was hard for me to put down and I couldn't wait to see how it all ended. Also, it appears to be a standalone and we don't get enough of those anymore.