November 21, 2014
I was pretty excited to read Nightmares! mostly because of the authors. I adore Jason Segel (or maybe  I just adore Marshall-hard to say.) And I love Kirsten Miller's Kiki Strike books. A book written by the two of them together was too good a prospect to pass up. While fun, I didn't love it quite as much as I expected to. 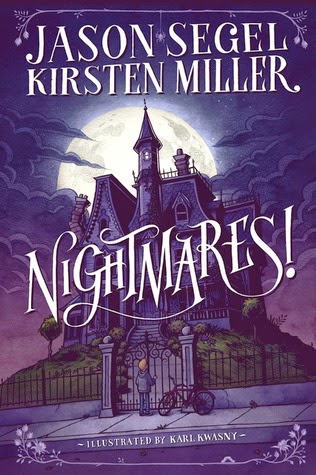 All his life the mysterious purple mansion on the hill has fascinated Charlie Laird. But now that he's living in the mansion, he's not longer so excited about it. Another thing he's not excited about is his new stepmother, Charlotte. He's convinced she's a witch. What other explanation is there for the witch who haunts his dreams at night? After all the witch looks too much like Charlotte to be a coincidence. Charlie is doing everything he can to stay awake so the nightmares don't come. Then Charlie discovers his friends are also having strange recurring nightmares and the mysterious new principal features in a lot of them. When the witch from his nightmares takes his brother into the Netherworld (world of nightmares) through a portal in the mansion, Charlie follows and has to face and defeat his worst nightmare.

Charlie is having a rough time and he's taking it all out on the people around him driving those who love him away. He is angry and resentful. He is still highly sympathetic because it is clear he misses his mother, his old house, and doesn't know how to embrace the changes in his life if it means letting the past go. His relationship with his brother and father are suffering. He feels like his life is being consumed by darkness. Charlie's story is peppered with many doses of humor and at times their is a lighter treatment to the issues, but it is a hard journey. I did like how the darker themes were balanced with enough lighter elements to make it fun and have depth at the same time.

The concept of a world in which nightmares live is an interesting one. I enjoyed how the kids only had to face their fear-what the nightmare truly represented-and defeat it to be free. It wasn't necessarily easy, because first they had to figure out what the underlying fear was. And it showed how nightmares can come in all sorts of shapes and sizes. Though I feel Charlie's confrontation with his "worst nightmare" didn't ring true with the rest of Netherworld, but it was a scene that made me cry.

This is a book that will have a lot of appeal and is well done. I can see kids really loving it. And the cover is marvelous.

Brandy said…
It's a fun one. And not too scary so an easy one to hand over to kids with no worry of frightening the sensitive.
November 23, 2014 at 6:42 PM