November 17, 2014
I am continuing to make my happy way through Jennifer Echols' backlist. This past week in keeping with our first wintry weather of the year, I read The Ex Games. 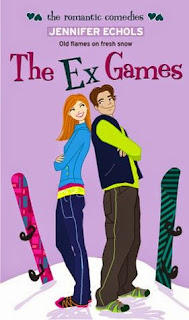 Hayden was excited when her family started over again in Colorado after a traumatic couple of years in Tennessee following her broken leg. She was even more excited when, on her first day in her new seventh grade, the cutest boy in school plopped down beside her and swept her into a month long dream romance. But it turned out Nick had made a bet with his friend Gavin about getting the new girl to date him. When Hayden finds out, she breaks up with Nick in a spectacular display that most of their classmates witnessed at the movie theater. Four years later, Hayden and Nick are juniors and their relationship has mostly consisted of snarking each other. Now that Hayden's best friends have hooked up with Nick's best friends, everyone in the school assumes they will get back together providing entertainment for the whole student body. Hayden even thinks it might happen. Then Nick demeans her winning a snow boarding competition and says she would never be competitive against a boy. The challenge is on now in a three event personal comp between Hayden Nick, but the competition extends to everyone in the school. Girls versus Boys for concert tickets. Everything is riding on Hayden beating Nick, including her own plans for her future. Can she conquer her fear of jumps and truly become a professional snow boarder? And will her and Nick ever be able to get it together and stop fighting long enough to make a relationship work?

What I really love about Echols's books is how realistically teen her characters are. They do behave in ways that would drive me bananas if these were adult books, but as teens their decisions, drama, and cluelessness make so much sense. Her characters remind me of teens I actually know. I particularly appreciate this about her male characters as often in YA books the boys are too ridiculous perfect. Echols's boys are not, and Nick is no exception. He does dumb teen boy things. He says dumb teen boy things. He has no clue how to make up with Hayden for being a dumb teen boy and so he stumbles around their relationship like a newly born blind kitten knocking things down all over the place. Hayden isn't much better about negotiating their rocky relationship. That's what's so much fun about this book, watching them learn and try to figure it out. And in the end they are both good people you want to see happy. They both have their insecurities they need to work on, but I couldn't help but want to see them fix things together.

The Ex Games is a fun romantic read to get in the winter spirit. It is no longer available in print, but can be purchased as an e-book.

Anonymous said…
No longer available in print? Now I feel old because I bought this in paperback. It's nice to see that you're enjoying Jennifer Echols' books. :)
November 17, 2014 at 9:37 AM