The Jupiter Pirates: Hunt for the Hydra

November 10, 2014
The cover for The Jupiter Pirates: Hunt for the Hydra by Jason Fry pretty much sells itself. Hold this up to a bunch of upper elementary kids and watch their eyes light up with anticipation. To seal the deal all you need to say are three magic words: Pirates. In. Space. Now try not to get knocked over. This book is all kinds of fun, but also has some more serious elements tossed in that make it so much more than it first appears. 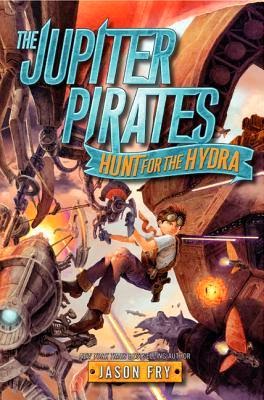 The Hashoone family are privateers licensed by their home government on Jupiter to take Earth merchant ships as prizes. They mostly live aboard their ship, the Shadow Comet. Twelve year old Tycho Hashoone is a member of the bridge crew along with his twin sister, Yana, and his older brother, Carlo. Their mother is the Captain and their father is the First Mate. Their grandfather, the former Captain, does a lot of curmudgeonly grumbling about how things aren't like the good old days of pirating while his daughter tells him to be quiet. When the Shadow Comet captures a ship that has a mysterious and suspect diplomat from Earth on it, they take the ship home and allow the court to decide if its fair game or not. Soon they realize that one ship is only one layer of a conspiracy by Earth that involves an old enemy and a dangerous mission to find out what is happening to Jupiter ships and their crews that are disappearing.

There is a lot of adventure and mystery in Hunt for the Hydra. The book has all the elements one could possibly want in a book about pirates in space. There are space battles, close calls, intrigue, shadowy figures doing shady things, and ships to capture. In all of this there are underlying themes of diplomacy, the politics of war, slavery, and humanity. There is also the interesting question of how different is a pirate and a privateer? Where does one draw the line? The Hashoone's grandfather is not quite as ethical and honorable as his daughter. Where does that leave him? On the side of the good guys? Are there any good guys? It is a lot of thought to pack into a 200 page book of adventure, but Fry does it well. We are left wondering a lot about this futuristic world in which there were space colonies of earth all over the galaxy, some kind of rebellion that gave them the right to rule themselves, and now a war between some of the former colonies and Earth.

What is the most interesting part of the book for me is the dynamic between the three siblings. Tycho is definitely set up as the hero of the book. The book follows his perspective and thoughts. He is not the best at anything. His brother is the better pilot, and he is quite full of himself as a result. His sister has her own special talents, and has an attitude to go with it that includes challenging her mother, the Captain, far too often. The interesting thing about them is only one of them will be able to take her place. They are in active competition for the role of Captain of their family's ship, and they know it. This does an interesting thing to the sibling dynamic, which is always fraught and full of competitiveness to begin with. These kids aren't just competing in their own minds, their parents have set up a computer log to track and rank everything they do on the ship from simulations to actual battles. Talk about pressure. They have no ideas what the logs say, and their parents don't tell them. This family has some serious issues as a result of this, but they also clearly love and care for one another. They have each other's backs and work together (the kids have a hard time with that from time to time thanks to the competition, but make improvements as the book continues). It's a really fascinating character study.

And again, I'm impressed with Fry's ability to do all of this and the heart pounding action in 200 pages. Bit pretty much snatched this out of my hand the second I was finished with it. I wasn't kidding about the appeal to kid factor at play here. If you have a young lover of adventure stories in your life, this is a book to add to your home, school, classroom, etc.

Brenda said…
This does sound good, I can see the appeal. The cover does look kinda steampunk, are there cool gadgets too?
November 10, 2014 at 10:41 AM