February 25, 2015
Blackbird Fly by Erin Entrada Kelly appealed to me for so many different reasons. I am always looking for good, MG school stories, and this is one about an immigration experience as well. It's a good one too with strong characters, excellent themes, and a realism about middle school that made me slightly sick to my stomach. 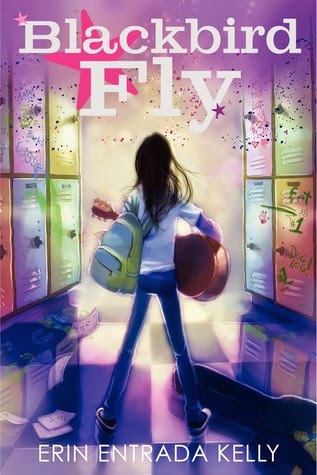 Analyn, known by her nickname, Apple, moved to the US from the Philippines when she was only four years old. In the years since she has learned a disdain for herself and her mother. She is embarrassed by the food her mother cooks and how she saves every penny. She longs to be more like her American classmates. It is not easy being the only Filipino in her small town Louisiana school. Things get worse when Apple's social climbing friends want to have boyfriends, and it is revealed that Apple has made the school's "Dog Log". Apple hates herself more and more as school becomes even less bearable. Things at home are not much better. All Apple wants to do is learn to play guitar, and her mother won't allow her. Through some new friends, a lot of awful mistakes, and some hard lessons Apple begins to look beyond the small mindset of middle school social dynamics and works hard to make her future dreams a reality.

This book is seriously well done. So well done it actually hurts to read it. Middle school is the worst. I actually had knots in my stomach as I read about Apple's life. The often racist teasing. The yearning to fit in and be the same. The realization that her friends were not behind her. It's a wretched time for anyone and Apple's story conveys that so well. All MG readers will understand Apple on some level. In addition to the typical middle school story we also have Apple's feelings on being an immigrant child. Her embarrassment and resentment of her mother is conveyed so well. This is something else that readers will be able to identify with. What middle schooler isn't embarrassed and resentful of their family? But through Apple's eyes and story, readers will also learn that everyone has a story. The majority of the supporting characters are just as well drawn as Apple and each has a perfect place and moment in her story.

Blackbird Fly is a book about learning who you are and embracing it. I like that it doesn't make everything perfect though. There is one scene that is a bit over the top as far as breakthrough moments go, but it fits so well into where it is in the story and everything else around it is so real, I'm okay with that. And there is no indication that life is sunshine and roses after that. I did feel the end wrapped up a little quickly, but I also like that the books is as short as it is.

I enjoyed reading Blackbird Fly and recommend it to anyone who loves good MG school stories. I will certainly be putting a copy of it in the hands of my daughter.

I read an e-galley made available by the publisher, Greenwillow Books, via Edelweiss. Blackbird Fly goes on sale on March 24th.

Brenda said…
wow, from your review sounds like the author captured the middle grade experience very well. I like when books like this one, don't make everything perfect. Will have to check it out.
February 25, 2015 at 12:35 PM