February 09, 2015
I was introduced to Laura Ruby through my Twitter feed courtesy of Anne Ursu. She is an expert ranter about the things she is passionate about, and as we are passionate about many of the same things, I jumped at the chance to pick up an ARC of her new book, Bone Gap. I already knew she had a way with words and I couldn't wait to see how that manifested itself in a fiction narrative. It turns out Ruby is even more amazing when writing fiction.

This book is one that needs to be read. It begs to be read. Nothing I say in this review is going to do this book justice. It's one of those books you simply have to experience. Just read the book. 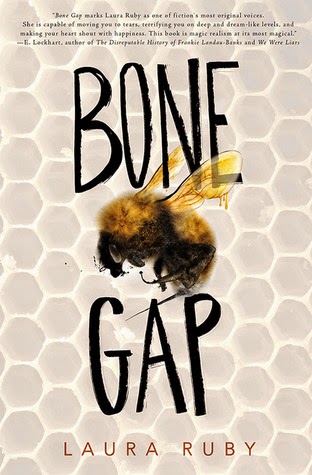 Bone Gap is a tiny midwestern town full of fences, cows, chickens, corn, and gaps. Gaps a person could disappear into never to be heard from again. Bone Gap is a place most people can't wait to get out of. This is true for the O'Sulivan boys as much as anyone. Older brother Sean had dreams of going to medical school, but put them on hold to stick around for his kid brother after their mom leaves them for an orthodontist who doesn't like kids. Younger brother Finn is in the summer between his junior and senior year of high school and working hard to get ready for his college applications. They will be his ticket out. But the brothers are currently both reeling from the disappearance of Roza, a beautiful girl who mysteriously entered their lives, and then just as mysteriously left them. Sean has resigned himself, figuring she chose to go of her own accord just like so many others had, including his mom. Finn knows better. He saw the mysterious man who came and took Roza away. Unfortunately he can't remember enough to help find her. As the summer continues, Sean's anger and resentment toward Finn grow. Finn, haunted by nightmares of Roza's disappearance, takes to going out at night and meeting up with Petey, the girl he's always had a crush on. As their relationship grows and the time since Roza's disappearance lengthens, Finn begins to feel better. But soon discoveries are made that make it impossible for everyone to ignore some harsh truths about themselves and life in Bone Gap.

Bone Gap is told in third person and follows the perspectives of several characters, mostly focusing on Finn and Roza. The reader also gets several glimpses into the mind of Petey and Sean. I loved the switching perspectives and how they give such a complete picture of what is going on. At the same time though, the way Ruby pieced these perspectives together gives the book a thrilling, edge of your seat, sense of urgency and mystery. Bone Gap is a puzzle where each piece is handed out one at a time, ending in a beautiful picture of family, community, love, friendship, and hope for the future. But some of the pieces are dark. Very dark. And that is part of the beauty of the finished picture. Ruby pulled it all together so well. And she has some great things to say through both Roza's story and Petey's story about the expectations society has for women and how that can trap a person. There is so much richness and depth to the whole book.

Bone Gap itself comes to life and is just as important to the story as any character. I have said before I have issues with small town books that are full of quirky characters. Ruby managed to stay balanced on the fine line between necessary oddness and too much quirk with Bone Gap. Bone Gap is a weird place for many reasons beyond being a small town. Reasons that become more evident as the story unfolds. The residents themselves are fairly typical people with their own little quirks and foibles, but there is never an overwhelming sense of it being too strange to be real. The people in the town and their stories are real and are brought to wonderful life.

As amazing as the plot, themes, and setting are, the characters are what truly won my heart. I'm a character reader and Ruby does characters well. There is a richness and depth to all the characters that make them feel so real. I haven't been this thoroughly immersed in the lives of the people in a book for quite some time. Finn and Petey in particular have my heart. They are both so odd and awkward. She is prickly and angry much of the time. He is confused and muddled. Together they manage to find peace and happiness, but even then things aren't easy. It's just so real. And I love how their relationship developed from the giddiness of first experiences to dealing with the harsh realities of fitting together two individuals with insecurities and problems. Sean and Roza have a similar dynamic with their own set of issues, and I like how the two relationships contrasted each other. Roza's story, for all its steeped in the magical, is all too real and harsh. They all have so much to offer as people, and so much to overcome to be able to do that. They are people I want to know, and this book makes me feel like I do know them. Like I'm part of their story.

This is my favorite read of 2015 so far and I've really liked all the books I've read this year so that's saying something. it is one of those books that I'm going to be telling everyone about and harassing them to read.

I read an ARC received from the publisher, Balzer & Bray, at ALA Midwinter. Bone Gap goes on sale March 3.

Curling Up With a Good Book said…
Your review ROCKED!!!! I have now become a follower of your blog! Look forward to talking with you about the book world!!!! :) Follow my blog! and find me on twitter/facebook: @CurlUpWGoodBook Facebook Page: https://www.facebook.com/CurlingUpWithAGoodBook?fref=ts
February 15, 2015 at 11:58 AM