I'll Meet You There

February 05, 2015
I read Something Real by Heather Demetrios last year and was completely taken by surprise when I LOVED it. I was eagerly anticipating her 2015 release, I'll Meet You There, even though I knew, given its subject matter, it would probably leave me wrecked. Well it did in the way only really great books can. 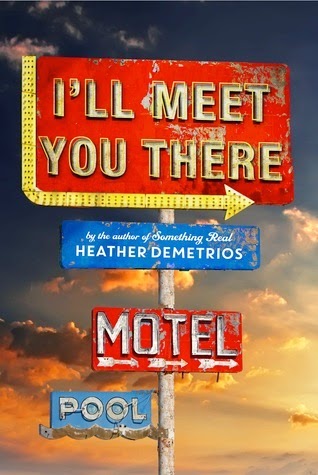 Skylar is counting down days until she can get out of the nowhere town she has lived in all her life. She and her best friend, Chris, had a pact. They focused on school and kept away from the drunken parties and hook-ups their classmates were having, and it worked. They are both off to college with scholarships. There is only one more summer left for Skylar to make it through, working at the Paradise hotel. But when her mom loses her job and falls off the wagon, Sky sees her chance for escape slipping away. It doesn't help that there is someone else tempting her with the what ifs of staying. Josh Mitchell was their high school's popular playboy. Now back from a tour in Afghanistan, missing a leg, and fundamentally changed from the boy he used to be, Josh is trying to figure out exactly what it is he's supposed to do next. Why of all people did he make it back? What is he going to do with the chance he's been given? And how can he figure that out when everything is so messed up? As the summer progresses Josh and Sky are drawn closer and closer together, but it may be too hard to work through all the wrong in their lives to find something right.

I'll Meet You There is told in alternating voices. It is mostly in Sky's first person perspective, but there are also chapters that are entries from Josh's journal-the words he writes to his dead best friend, killed by the same IED that took his leg. Both Sky and Josh have a lot of seriously rough stuff to sort through in their lives. Sky is dealing with the very harsh realities of poverty as her mother no longer has a job and then kicks her out of the house. Fortunately Sky has people around her to help her who love her, but seeing the true and real effects of poverty portrayed in YA is not the  norm. It's frustrating as a reader to Sky flirting seriously with the idea of throwing her chance for a future away to take care of her mother. This frustration is mirrored in her two best friends, Chris and Dylan, who insist her mother is an adult who can make her own choices and mistakes. Even with this frustration, it is all too easy to see why Sky might wish to stay. It is hard to walk away from everything you've ever known even if you are walking toward something better. I think her feelings, insecurities, and struggles are ones many readers can recognize and empathize with though they may not have experienced the same circumstances.

Josh's character is equally well done and nuanced. He is the epitome of a boy/man: still so young, but he's seen more than most people twice his age. Demetrios did an excellent job of showing all the facets of his being a Marine. He is suffering from PTSD, has to learn how to be the new him in the town he grew up in, and despite his trauma, he still has a fierce loyalty to the military. Being a Marine is the very heart of who he is. He does some really terrible things to both himself and Sky. He uses descriptive language that is often highly offensive (not because of the number of "curse words", but some other more derogatory type words he uses). At the same time, his heart is just so good and he wants to do what is right. You can see that. My heart just broke for him as he tried to figure out what to do and how to be. He truly feels like he is a disaster waiting to happen to Sky, and yet she helps him so he can't really stay away from her. He doesn't want to. This is a story about two broken people finding each other. In the process they break each other a little more, but they also help put each other back together. What I really liked about this is that they also both work to put themselves back together. Their relationship is not codependent.

I also very much enjoyed the supporting characters in the book. Josh's brother, Blake, is an idiot at times, but really loves his brother and tries very hard to be helpful in his own idiotic ways. Chris is a great foil for Sky. In many ways they are very much alike, but they are different enough in the ways that matter, that he balances her well. Marge, the owner of the hotel where Sky and Josh work, is a motherly type who helps and cares for both of them. Sky's other best friend, Dylan, is my favorite supporting character though. Her first appearance in the book, drunk and making reference to hooking up, leaves a first impression that is not all that flattering. She's a teen mom. She parties. She enjoys sex. Sky and Chris spend a good deal of time feeling bad for her stuck life. But man, this girl is more than she first appears, and even Sky doesn't fully appreciate all the depths her friend has until it's almost time for her to leave. I really liked how Demetrios showed that while Dylan's life was hard, it wasn't hopeless.

There are probably going to be some who are upset by the way some of the boys, particularly Josh, refer to some of the girls and each other. The words they use. The connotations behind them. It is an incredibly realistic portrayal though, and there are other characters who do call them out on this. I really appreciated how it was a fellow Marine who first opened Josh's eyes to how much more there was than the world he knew with his buddies in his hometown too.

I'll Meet You There is a beautiful and heartbreaking story that is also one of hope and new beginnings.

I read an e-galley made available by the publisher, Henry Holt and Co., via NetGalley. I'll Meet You There is available now.