February 17, 2015
Last year I read The Story of Owen: Dragon Slayer of Trondheim by E.K. Johnston and fell in love. I fell in love with the characters, the town of Trondheim, the world Johnston created, and the voice that told the story-Siobhan. I immediately began looking forward to the sequel, Prairie Fire. Now that I've read it, I'm sort of wrecked but only the best of ways.

Prairie Fire is very much a sequel in the strictest sense of the word. It is the second half of Owen and Siobhan's story. While you could probably read it first, the emotional pay off will be far greater if you don't. If you haven't read The Story of Owen, go and do that. I don't know what's been holding you back anyway.

Spoilers for The Story of Owen ahead. You've been warned. 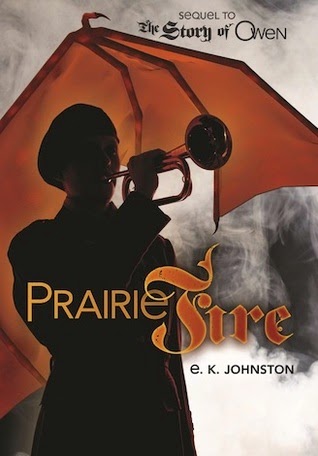 Siobhan, Owen, and Sadie have graduated from high school and are beginning their service to the Oil Watch. Siobhan has mostly recovered from her encounter with the dragon that left her hands burned, but she will always have limited mobility. She is learning to cope. She has found a different instrument. She still feels a strong sense of purpose. Siobhan is Owen's bard, and she does not take that commitment likely. Hailed by much of the populous as heroes, Siobhan and Owen are not looked on quite as favorably by their government. They find themselves stationed in Alberta on the edge of the Canadian prairie-an assignment that's kind of a slap in the face given Owen's talent and proven ability. But their support team is top-notch and they've bonded. They find the other two novice teams, one American and one Japanese, easy to work with. All three teams forge new ties and friendships, bonds needed living in the realm of the most dangerous dragon species alive with an instructor who is a frowned upon rule-breaker and a general who scorns all the things Owen and Siobhan stand for.

"When Lieutenant Porter said 'it's our busy season', what he'd meant was 'Shit there are dragons everywhere. Duck.'"

This quote sums the book up nicely. There are a lot more dragons, dragon slayings, and close encounters with dragons in this book than the first. There was quite a lot of set-up in the first book. It was a time to get to know both Owen and Siobhan, time to get to know the world, and to fully understand what it was the Thorskgards were fighting for. True, there were plenty of dragons to be found too, but in this second half they're everywhere. Also in this book the reader is introduced to the mother of all dragons-nearly unbeatable and scary as everything. The pace is much faster than the first book. It feels like a head long rush to the explosive and shattering end.

Siobhan's recovery is rather skipped over. Her emotional recovery happens much faster than seems reasonable until you remember how young she is. And young people often can bounce back and find new routes quicker than adults. She still has her music. It's just different. I think too that her being a rather even tempered individual from the start helps the believability of this. The story becomes Siobhan's more than ever as she and Owen are separated for quite some time. The government is trying to keep Siobhan's influence over public opinion to a minimum. They want the people to forget Owen's a hero. Owen's presence is still felt even in his absence though, and Siobhan still works on ways to get what he is capable of out there. These two have an amazing relationship, a friendship that is truer and stronger than average. I love how much they give to each other and complement each other. Siobhan gave Owen a voice. Owen gave Siobhan a story. And it is absolutely beautiful.

There are a number of new characters introduced in this story and I loved them all-Courtney the engineer and Porter the lieutenant especially. The other two dragon slayers add so much to the story as well and I love the interactions between them. (Nick, the American from NYC, was a particular favorite and I wished we had just a bit more from him.) The characters in the first book are all back though we see far less of them now that Siobhan and Owen are away from home. Sadie is present for much of the first half, but is assigned to the UK while Siobhan and Owen remain in Canada. I enjoyed her when she was there though. She is a perfect balance to both Siobhan and Owen.

Thematically this book is even more brilliant than its predecessor. The slayers and their teams are all so young. All serving their countries and the world in a noble pursuit. But bureaucracy and politics being what they are, they can't always do it effectively. They are dedicated, bold, and brilliant. What they do has a high cost though and Johnston shows that beautifully.

Basically this book left me sort of wrecked, but in a brilliant way.

I read an ARC provided by the publisher, Carlolrhoda Books, at ALA Midwinter. Prairie Fire goes on sale on March 1st.