March 05, 2015
I may never have known Audacity by Melanie Crowder existed if it weren't for Book Riot's post on feminist YA books of 2015. Thank you, Kelly Jensen, for writing that article. I haven't seen this mentioned anywhere else, and that is a shame. This is a brilliant and moving book. And I may need to officially revise my stance on verse novels.

Audacity is the story of Clara Lemlich. It begins when she is a teenager living in her shtetl in Russia. After a series of harsh pogroms agains the Jews, Clara and her family immigrate to America. The book chronicles their stay in a poor house in London, the steerage passage to the US, and their entrance through Ellis. Then it changes pace as Clara gets a job in a sweat shop and begins her fight for unions and justice in the garment industry. Told in beautiful first person perspective verse, Audacity is the story of a girl who had a fire burning inside her too bright for anyone to put out, and how she used it to warm and change the world. 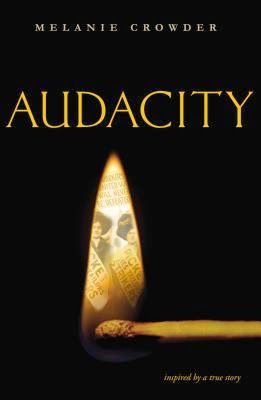 Clara Lemlich was a real person, but this book is historical fiction as it takes some liberties with the story here and there. Nothing is changed to take from the historical authenticity of the novel, there are just some thoughts and interactions Clara is involved in that would not be documented. There is a fascinating interview with her daughter and several of her grandchildren at the end that is also worth reading.

Clara was born into a family where the men studied the Torah and the women did the work. She was not allowed to go to school, not allowed to speak Russian, not allowed to learn to read or write. She defied her parents and secretly learned to do all of these things. She was constantly told good girls are obedient. Good girls do what they're told. But Clara made her own rules and fought for the herself and the girls she sat beside in the sweatshops day by day. Despite being beaten, jailed, and harassed, she never gave up. Audacity wonderfully captures her struggle and spirit.

Some excerpts that show the beauty and scope of the story:

How can I ever be more
than just someone's daughter
wife
mother
if I cannot study
if I cannot learn
if I am not permitted to have
even one book?

Just think
Pauline says,
if thousands of tiny lights
can outshine the moon,
is there anything
thousands of us
cannot do?

Audacity is full of ideas: feminism, idealism, the power of knowledge, fighting for what is right, and never giving up no matter how hard it gets. Clara's story is inspiring in thousands of different ways, and this should be included on shelves everywhere.

The book is considered YA, but strong MG readers can handle it as well. I can't wait to share it with my own daughter.