The Walls Around Us

March 09, 2015
I've heard a lot of good things about Nova Ren Suma's books. When the opportunity to read an ARC of her latest, The Walls Around Us, came up, I decided it was the perfect time to try her writing. I can see why so many have sung her praises, but sadly this book didn't work for me personally. There are several good aspects to it, but as a whole it was just not a Brandy book. 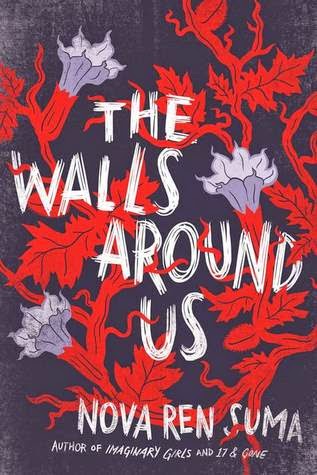 Violet is a star ballerina headed to Julliard and ready to leave behind her past. Part of the past she's escaping is the horrible memory of her best friend Ori and what happened in the tunnel of trees behind their ballet theater. The incident that sent Ori to prison and handed Violet all of her dreams. Amber was serving a sentence in the youth detention facility Ori was sent to. Amber was found guilty of murdering her step-father. Amber knows she has no future beyond the life she lives in the facility. Both girls tell their stories and, through them, Ori's story is told. Combined, the three girls share one story of friendship and hate, murder and revenge, ambition and power.

The combination of ballet and prison is an intensely interesting one. As you read both Violet and Amber's accounts there are a startling number of similarities between the two cultures. Hierarchies, those who bully, those who try and keep their heads down, the push and drive to become the most powerful. It is a fascinating study. I would love to hear from people involved in both worlds how accurate the representations here are, but from a purely literary standpoint, the comparison is incredibly well done. Violet and Amber play similar roles in the worlds they inhabit, the main difference being that Amber is more of a planner and better at execution when she wants something done. They both tell lies, not just to the people around them, but to themselves as well. Through them both, the reader sees plainly the power your mind has to manipulate your memories and make you believe what you want. This is a thing everyone does, just not on as grand a scale as Violet and Amber do it. Of the two girls, Amber was the person whose point of view I preferred. Violet was so self absorbed and unrepentant that I hated being in her head. I do think it is important that we were given that opportunity though. It's an important part of the story, and the dual narration lends the novel its sense of mystery and intrigue. I was saddened by how little we truly knew of Ori. Both girls have her on a pedestal-to them she is utterly perfect. Violet wants to knock her off that pedestal. Amber wants to worship her on it. I never got a sense of who she truly was a person, which was a real problem for me given the end.

The ending is my biggest issue with the book, and it's frustrating that I can't fully explain why without spoilers. I'll just say that the resolution didn't work for me at all. I didn't understand the mechanics of it. What on earth???? The supernatural aspects of the novel were really well done up until that resolution, and then I was just left feeling incredibly let down because it didn't make sense. I also feel like it counteracted a lot of the rest of the novel thematically.

I'm thinking I will read at least one of Suma's other novels to give her a fair chance, but this particular one left me confused, frustrated, and sad (sad because I feel like beautiful writing and well done characterization was wasted on an end that was ridiculous.)

I read an ARC received from the publisher, Algonquin Young Readers, via Edelweiss. The Walls Around US is available on March 24.