March 02, 2015
The Imaginary by A.F. Harrold is a delightful yet creepy tale for any reader with a big imagination and bigger heart. 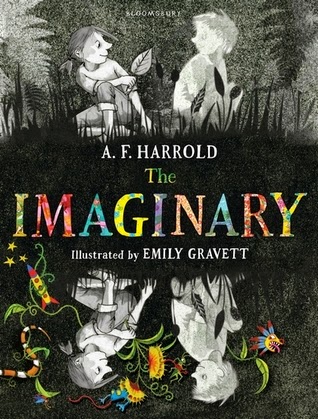 Rudger is an imaginary friend, dreamed into existence and kept going by the imagination of Amanda, a little girl who can dream up anything and loves adventure. Amanda and Rudger are going about their happy lives playing together, exploring the world, and saving it from all sorts of nasty creatures when their struggle becomes all too real. Mr. Bunting shows up at the house. Mr. Bunting is an adult with an imaginary. But there's something creepy and not at all comfortable about this pair and they are stalking Amanda and Rudger. When a tragic accident brought on by Mr. Bunting attacking Rudger greatly injures Amanda, Rudger begins to fade. How can an imaginary live without someone to imagine him? Fortunately Rudger discovers a place where Imaginaries can live on, finding new children. He isn't interested in a new child though. He only wants Amanda so he embarks on a quest to reunite with her and defeat Bunting and his sadistic imaginary once and for all.

Rudger is the main character of this story, and the world of imaginaries he inhabits his brought to beautiful life both through the words of the author and the gorgeous illustrations by Emily Gavett. (This is a visually stunning book even in black and white. I look forward to seeing the full color illustrations when it is released.) Rudger is unsure of the world and has trouble thinking for himself without Amanda, but as the story progresses he finds his own two feet and his own voice more and more. Amanda, while physically absent for most of the book, is still a very real presence whose imagination and creativity hover over Rudger and the entire story. This is the ultimate child/imaginary pairing. The story is told in such a way that it will enthrall children who have had imaginary friends and those who have not. The other imaginaries in the story range from an old dog to a pink T-Rex.

Everything about this world  is not fun and games though. There are some seriously creepy elements. Bunting is a very nasty sort of villain, and some of the things that happen could truly frighten some children. This is one of those books I recommend knowing your audience for before recommending. The cover may imply that it is for the younger end of the MG spectrum, but sensitive young children may not handle some of the elements well. For kids who like creepy and don't mind uncertainty and possible death in stories, this is a great pick.

I read an ARC from the publisher, Bloomsbury Kids, via the mail. The Imaginary is on sale March 3rd.

Kim Aippersbach said…
This sounds amazing! An adult with an imaginary friend as a creepy bad guy: I have the shivers already! Want to get my hands on this one.

On a completely unrelated note, I notice you have pages with various lists of your blog posts in different categories. Do you create those lists manually, or have you discovered how to generate them automatically? (The way the Labels widget does in the sidebar.)
March 2, 2015 at 9:47 PM

Brandy said…
I generate them manually. Usually the day after a review posts, I copy and paste it into Goodreads and Edelweiss with the link. After that I add the link to its proper page. As long as I update it regularly, it's simple and fast. I don't think there is a way to do it automatically, but if you ever find one, let me know!
March 3, 2015 at 9:08 AM

The Reading Nook Reviews said…
WONDERFUL review. I loved this book too, and I think you've hit on all the perfect points of what a reader should know and love. :)
March 5, 2015 at 12:19 AM

Kim Aippersbach said…
*As long as I updated it regularly*