March 19, 2015
I have been a big fan of Jinx and company from the very first book, which felt like such a perfect Brandy book. The conclusion of Sage Blackwood's trilogy, Jinx's Fire, finished the story beautifully and is definitely my favorite of the three. 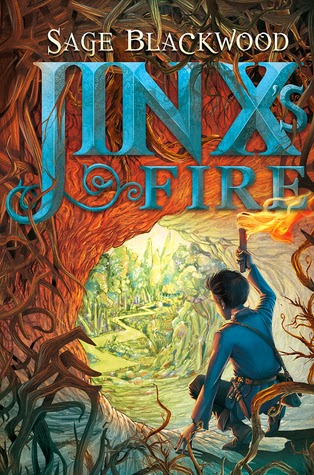 The Urwald is in danger from more than one direction and has no hope of defending itself if there is not unity amongst the people. Jinx, Sophie, Elfwyn, Wendell, and a dedicated group of others are working to make this happen as quickly as they can. Time is running out. At the same time, they are still dealing with the threat of the Bonemaster from within, and the Urwald's magic is fading. Where is it going? Can it be restored? And where has the Bonemaster put Simon? Jinx is the only one who can find the answers to these questions, and harnass the Urwald's power to save them all, but only if he is willing.

Jinx has some serious attitude in this book, and I loved every single snarly word of it. He has fully grown into his snarky grumpy self. It was particularly funny for the first part of the book, because you could tell he greatly missed having Simon to take it out on. Poor Jinx surrounded by all these people far more sensitive. And Elfwyn who is not interested in encouraging him in it anymore than necessary. It made for highly amusing interactions and scenarios despite the danger Jinx often finds himself in and the fraught political situation. Blackwood fully comes into a complete and sensible balance between humor and darkness in this final book. Both elements were always in the trilogy, but in this one they both feel equally organic and necessary. I love what an imperfect hero Jinx is. He is temperamental and a little too sure of himself at times. At others he is afraid to fully jump in and use the power he has to make things right. The struggle he has with that latter is a real one and is fully convincing. While I found myself empathizing with Elfwyn's impatience with Jinx, his hesitation to use the full force of his powers is completely understandable. I feel like this story was a brilliant finish to Jinx's character arc. From the young boy left in the woods at the beginning of book one to the often surly teenager he is in this book, his story has been fully realized. I really appreciate the combination of maturity and naivety Jinx has in this story. He has a lot of responsibility, but he is still very young. His confusion and embarrassment over all romantic relationships is adorable and hilarious.

Elfwyn is another character who fully came into her own during this book. I grew quite worried about her during book two and missed her presence greatly. This book more than made up for that as she is right there with Jinx through the majority of his adventures. And she makes her opinions known and heard. I love how she takes no nonsense from him and challenges him while simultaneously showing him support and friendship. It is just all kinds of wonderful. The way he tries so hard to be considerate of her curse, listens to her suggestions even when he doesn't want to hear them, and allows her to participate fully despite his worry for her at times is equally wonderful. I want to go back and read every scene between the two of them over again.

As with the previous books, Jinx's Fire has distinct parts. The beginning is the unification and strengthening of protection for the Urwald. The middle focuses on locating Simon and the Bonemaster. The last part is the epic battle to save the Urwald from its numerous invaders. These parts all flow together well, overlap in many ways, and weave together to tell the story of people fighting to protect their home and families. I felt all of these resolved in ways that made sense for the world and characters. I especially appreciated the shades of gray in some of the decisions that had to be made and the outcomes.

As the end of a much loved trilogy, Jinx's Fire delivered for me on every level. The end left a goofy grin on my face. If you haven't read any of this trilogy yet, now is the perfect time. If you have, you definitely do not want to miss this conclusion.

I read an ARC received via Edelweiss from the publisher, Harper Children's. Jinx's Fire goes on sale March 24th.

Kim Aippersbach said…
Oh, so glad the third lives up to the other two! And so glad it comes out next week! Thanks for your ringing endorsement that got me started on this series!
March 19, 2015 at 6:21 PM

Brandy said…
It really does. Such a good conclusion. And I'm so glad that you've liked these. It is always a bit frightening when I find out people have read something on my suggestion. Which is silly since it's kind of why we all do this.
March 19, 2015 at 9:15 PM