We would have been finished with 100 Cupboards by N.D. Wilson a lot sooner. It was one of those books Bit had me reading 3 chapters a day of and begging to push bedtime back for. Then we went out of town for two weeks and I left it at home. We were at a crucial point near the end too. Bit was unhappy with me. I made up for it by letting her skip piano practice one night this week so we could finish it. (My voice is still recovering.) 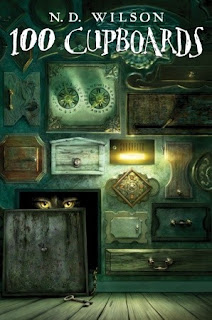 The Story
Henry's parents have been kidnapped while on one of their world traveling expeditions for the travel books they write. He has been assured they will be returned safely after being ransomed. In the meantime he is planning on enjoying himself during this unexpected stay with his aunt, uncle, and cousins in Kansas. Henry has lived an extremely sheltered and protected life and is reveling in new experiences such as baseball, climbing, and drinking soda. Then he discovers, hidden behind the plaster on one wall of his attic bedroom, 99 cupboards. The cupboards seem to go to other places. He can smell things in them, feel things, even see light and people moving around in one. Then he begins receiving mail from a couple and discovers things can come through them into his room. Henry and his cousin Henrietta begin searching for answers which leads to adventures in strange places, discoveries about Henry's past, their family's past, and the awakening of an old and dangerous evil.


Bit's Thoughts
I  Love This Book! I can't decide what to say first. It is one of those books that is slow and gets more and more exciting. Almost all the parts were my favorite. Henry is my favorite character. I like that he was curious enough to chip all the plaster off the wall. I like the adventures he had while searching for someone in the cupboards. He ended up finding someone else who was really weird. I think that Henrietta is really really bossy. I can't really decide if I like her or not.  I have a least favorite cupboard. It is to Endor and is creepy. It makes Henry sick. I think the book was scary around the end because it gets really intense. I thought I was going to have nightmares, but I didn't.

My Thoughts
This is one of the read alouds where Bit was able to choose any book from the shelf. I was pretty excited when she chose this one. I love Wilson's books and they make wonderful read alouds. The language in them is wonderfully rich and has the best imagery. The writing is descriptive, detailed and emotive. There are some parts of the book where the action is slow, but that is part of the genius of the writing. The plot unfolds in the same way the main character, Henry, emerges causing the reader to experience the action just as Henry is experiencing it. Note that when I say the action is "slow", I don't mean boring. It is never boring. Even when little is happening but discussions of tumbleweed and baseball, the way the words are written hold you in the story. The end is anything but slow and will have you reading faster and faster trying to find out what happens next. The villain is introduced in the last few chapters and is creepy with a capital C. Wilson knows how to write villains. Fortunately he also knows how to write heroes. Henry is a hero who lacks confidence,  imagination, and is sometimes cowardly, but a hero is what he is. He is just getting into his stride by the end of this book, which is most definitely a set up for the second book. Which brings us to:


What Bit and I are reading next: Dandelion Fire by N.D. Wilson