March 15, 2012
R.J. Anderson's Swift was one of my most anticipated reads of 2012. Anderson is an auto-buy author for me, so much so that if her books (like this one) aren't going to be foreseeably available in the US I order them from the UK. Swift did not disappoint, it exceeded my expectations for it. Anderson brought the story that began in Knife (my review) to a brilliant conclusion with Arrow (my review). Swift takes place in Cornwall and deals with an entirely different group of magical beings, Piskies. While there is a definite overlap between the first trilogy and this book you can read Swift without reading the others. (Though why would you want to? And if you don't read them first you will definitely want to once you have finished this.) 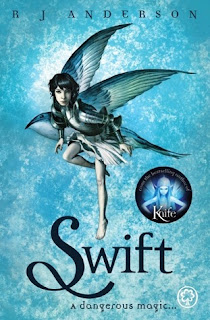 Ivy is a Cornish piskey living with her family and people in an old mine. Ivy is different from the other female piskies. She is smaller and more fail and, most devastating to her, born without wings. Being different hasn't been easy on Ivy nor has the disappearance of her mother, presumably snatched by spriggans, her people's fearsome enemy. When a strange creature, presumably a spriggan, is taken captive by her people and Ivy stumbles upon his cell she makes a dangerous bargain with him. If she helps free him he can take her to her mother and teach her how to fly. This sets Ivy off on an adventure that will forever alter the way she sees herself and the world she grew up in.

What I consistently impresses me about these books is that each heroine is very different from the ones who have come before her. They all share a similar spirit, but their personalities and how they go about achieving their goals is quite different. Ivy is, to me, the most interesting one yet. She has a confidence in herself that is mixed with fears of inferiority. She is stubborn and strong willed, but also willing to explore new ideas and entertain the notion that she may be wrong about things and need to rethink them. Having been sheltered all her life, completely shut off from the outside world, she has much to learn and yet she has a real sense of adventure and is not afraid of the unknown.

The mysterious captive who offers Ivy the bargain for her heart's desire is as fascinating as they come too. Ivy calls him Richard, but that is not his name. When she discovers him for the first time he is alone in the dark and is despondent. What is he doing in his despondency? Quoting Shakespeare. You should have seen the smile on my face when I reached that page. I admit I was excited and extremely happy to find they had captured a Shakespeare quoting magical being. I was kind of hoping we would get more of a certain character who fit that description.

The story itself is an interesting one full of intrigue and a lot of action. As always, the themes Anderson explores through the plot are just as engaging as the plot itself. There is a blood feud that shows what a cruel face justice can have when it is used as a mask for revenge. There is the danger of what happens when we allow the stories we tell about our pasts to become the truth we believe about ourselves and our history. There is the fine line that exists between protecting those we love for their good and enslaving them for our own. Good food for thought and excellent execution all around.

While the book has a definite end it leaves the door open for more which I am anticipating. There is still a lot left to explore both individually for Ivy and "Richard" and with their connection to each other. (Whether it turns out to be a romantic one or not. There was no romance in this story though there was definitely potential for that to develop. Yet there is also potential for things to develop in a completely different fashion. I'm interested to see where Anderson might go with all that.)