March 23, 2012
I read and fell in love with Graffiti Moon by Cath Crowley (my review) a couple of months ago. I loved it so much I immediately ordered A Little Wanting Song, the only other Crowley book available in the US. I'm happy to say that it is also an excellent book and I really hope to get more from this author in the future. 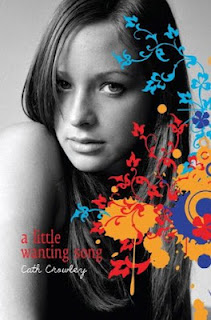 CHARLIE DUSKIN loves music, and she knows she's good at it. But she only sings when she's alone, on the moonlit porch or in the back room at Old Gus's Secondhand Record and CD Store. Charlie's mom and grandmother have both died, and this summer she's visiting her grandpa in the country, surrounded by ghosts and grieving family, and serving burgers to the local kids at the milk bar. She's got her iPod, her guitar, and all her recording equipment, but she wants more: A friend. A dad who notices her. The chance to show Dave Robbie that she's not entirely unspectacular.
ROSE BUTLER lives next door to Charlie's grandfather and spends her days watching cars pass on the freeway and hanging out with her troublemaker boyfriend. She loves Luke but can't wait to leave their small country town. And she's figured out a way: she's won a scholarship to a science school in the city, and now she has to convince her parents to let her go. This is where Charlie comes in. Charlie, who lives in the city, and whom Rose has ignored for years. Charlie, who just might be Rose's ticket out.

This story is told in alternating viewpoints between the two girls, Charlie and Rose. This is about both of them, their fears, their hopes, their insecurities, their dreams, and ultimately their friendship. At first I wondered if Crowley would be able to write from the perspective of two girls and make them distinct from one another. I didn't need more than a few chapters to answer that. Charlie and Rose are very different people. I found myself with an instant affinity for Charlie. I don't have her talent for music, but I do have her silent, introverted, awkward thing going down. I was A LOT like her when I was in high school. I also love music and use it as an escape like she does: I went inside and found a song on my iPod with a hard bass line and a whole lot of drums and I let the music rip a hole in the world, one that I could walk through and be somewhere else for a little while. I could never have come up with words so perfect to describe that feeling. It took me longer to warm up to Rose, probably because I could relate to Charlie so well. However, Rose is sympathetic too and soon I was just as concerned for her welfare. She is bright, loves science, and wants noting more than to get out of her dead end town. It takes a lot of wanting to get out of a place like this, though. It takes wanting so bad it's all you care about, all you dream about, all you breathe. Some days I think it takes more wanting than I've got. Both girls have strengths and both have flaws. Together they learn a lot about themselves and their views of the world and others lives. I do feel like this was mostly Charlie's story, but Rose has an important story of her own outside of the role she plays in Charlie's.

The romance in the book is also done well, both in Charlie's developing flirtation with Dave and Rose's complicated fragile relationship with her childhood sweetheart, Luke. Both romances contrast and compliment each other, one just beginning and one possibly coming to an end.  All four characters are real, unique, and grow over the course of the summer changing the dynamics between the characters frequently. Crowley did this with never once resorting to melodramatic tactics of people hooking up with people they shouldn't or other such nonsense. Teenage mistakes are made but they are made in humorous and realistic ways. Misunderstandings are logically sorted out and unnecessary drama is never visited on the plot. And man can Crowley describe a first kiss: And then we're at that moment when you both go and get what you want or you both go back. The moment when you say, Stuff being scared; what's on the other side is better. That moment when you inch closer to each other little by little, till your skin starts and ends in the same place. Till your faces get so close your lips start and end in the same place, too. Till you taste milk shake and salt and sugar days and the world spins and the stars sound like harmonicas.


I haven't even mentioned all of Charlie's song lyrics inserted into the story which make me wish she were an actual person who could record those songs so I could buy them. I totally would.

Note on Content: There is strong language used and some discussion of sex (no one is having any).

Chachic said…
Brandy, this seems like another excellent Aussie YA novel! I saw that you gave it 5 stars in Goodreads so you probably loved it just as much as Graffiti Moon. Looks like this one focuses on music the same way Graffiti Moon focuses on art? I'll bump it up the TBR pile after I'm done reading a couple of books from my priority list.
March 26, 2012 at 5:15 AM

Brandy said…
I did love it as much as Graffiti Moon though it is very different. The friendship rather than the romance is central to this one and the characters are younger.
March 26, 2012 at 7:53 PM