March 27, 2012
The Juliet Club by Suzanne Harper is fluffy fun, but intellectual fluffy fun. After all, it is fluffy fun that takes place during a Shakespeare seminar on Romeo and Juliet. It is perfect if you are in the mood to read a lighthearted romance with a little of the Bard thrown in for fun. 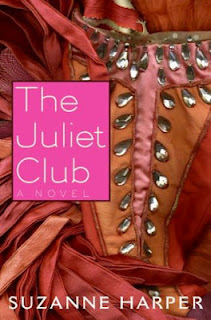 Kate Sanderson inherited her good sense from her mother, a disciplined law professor, and her admiration for the Bard from her father, a passionate Shakespeare scholar. When she gets dumped, out of the blue, for the Practically Perfect Ashley Lawson, she vows never to fall in love again. From now on she will control her own destiny, and every decision she makes will be highly reasoned and rational. She thinks Shakespeare would have approved.
So when she is accepted to a summer Shakespeare symposium in Verona, Italy, Kate sees it as the ideal way to get over her heartbreak once and for all. She'll lose herself in her studies, explore ancient architecture, and eat plenty of pasta and gelato. (Plus, she'll be getting college credit for it--another goal accomplished ) But can even completely logical Kate resist the romance of living in a beautiful villa in the city where those star-crossed lovers Romeo and Juliet met and died for each other? Especially when the other Shakespeare Scholars--in particular Giacomo, with his tousled brown hair, expressive dark eyes, and charming ways--try hard to break her protective shell?

This book contains plenty of Romeo and Juliet, but does not mirror that particular play at all. It is quoted, it is discussed, the students in the seminar are answering letters written by people around the world to Juliet, but the plot itself has a fair amount of Much Ado About Nothing with a dash of The Taming of the Shrew thrown in for good measure. It is all a lot of fun. Whatever the synopsis might lead you to believe Kate is not the center of the whole story, in fact very little of it past the beginning is told from her point of view. The narration is third person and the characters come and go like players on a stage. Despite it's narrative form it definitely reads like a play or movie and you become well acquainted with all of the characters. One issue I had with it was that Kate was the least developed character for being the supposed lead. By the end I knew everyone else much better. I also thought there were a couple of plot threads left unexplained at the end (Giacoma/Sylvia history for one), but overall the book was an entertaining and fun night's read.