The Girl Who Could Silence the Wind

March 07, 2012
I had no real expectations for The Girl Who Could Silence the Wind by Meg Medina going into reading it other than "ooh pretty cover" and "wow here's a different setting for a novel". I have to say I enjoyed it immensely. Medina is a truly talented story teller. 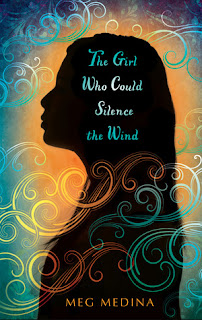 Synopsis (from Goodreads):
Sixteen-year-old Sonia Ocampo was born on the night of the worst storm Tres Montes had ever seen. And when the winds mercifully stopped, an unshakable belief in the girl's protective powers began. All her life, Sonia has been asked to pray for sick mothers or missing sons, as worried parents and friends press silver milagros in her hands. Sonia knows she has no special powers, but how can she disappoint those who look to her for solace? Still, her conscience is heavy, so when she gets a chance to travel to the city and work in the home of a wealthy woman, she seizes it. At first, Sonia feels freedom in being treated like all the other girls. But when news arrives that her beloved brother has disappeared while looking for work, she learns to her sorrow that she can never truly leave the past or her family behind.

Allow me to say that I'm completely chagrined to admit that I don't know whether this is contemporary or historical fiction. Given its setting it could be either. If it is historical it is very recent historical. Despite my ignorance on this, the novel has a very definite sense of place. The setting is described beautifully. It is detailed without being overly descriptive and makes you see what the characters are seeing. I was left with a real impression of both Sonia's mountain home and the city she journeyed to. The harsh reality of the lives of the people is clear as well.


Sonia's story is one that anyone can identify with on a human level. She is unsure of her destiny, questioning her beliefs, wanting to escape the life she has always led, yearning for love. Any 16 year old has experienced the same. Yet Sonia is also trying to survive the harsh realities of her world. Realities that include pampered rich boys who think pretty servant girls are their play things and a brother willing to risk his life in exchange for a chance at a better one. Medina didn't shy away from any of theses harsh elements, but did not allow them to make the story itself harsh or gritty. In the end it is really a story about hope, moving forward, and the ties that bind family and community together. There is a thread of what some would refer to as "magical realism" in the story. It is not the point of the story, but does play a role in resolving it.


There is also a bit of romance. Remember I said Sonia was yearning for love? Well that yearning has a name and his name his Pancho. He is a taxi driver who is also a poet (and doing a fair bit of yearning of his own). He is also a hero in every sense of the word. Their romance is very subdued and not at all the main focus of the story. It takes a back seat to the larger action resolving itself, but it is still very sweet.


All of the other characters in the book stand out as well. When I finished it I though my strongest impression was of the setting but as I type this I have a clear recollection, not only of the other characters names-Raphael, Oscar, Teresa, Mongo, Dalia, Felix, Blanca, Tia Neli,-but their personalities too. Medina brought the entire Ocampo family and the people of Tres Montes to life.


I would recommend this book for anyone looking for something a little bit different than the norm in YA literature. If you enjoy reading about other places and cultures this is a definite must read. I am going to label it as historical, but if anyone knows differently for sure tell me and I'll change it.


I read an e-galley received from the publisher via NetGalley. The Girl Who Could Silence the Wind will be available in stores March 13.