March 21, 2012
Peaceweaver by Rebecca Barnhouse was not just one of my most anticipated reads of 2012, it was THE MOST anticipated read of 2012. It has been pretty much since the moment I finished reading The Coming of the Dragon (my review) last year. If you read that book you will want to read this one. If you read this book you will want to read that one. It doesn't matter which one you read first. They are companion novels that are really stand alone stories. They overlap at their ends but they are about two different journeys. And Peaceweaver was everything I was hoping it would be. (And really, look at the cover and tell me how could you not want to read this book.) 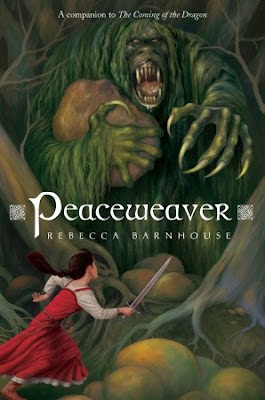 Hild is the favored niece of the King of Shylfings. She has been given the honor of serving the mead in the Hall to her uncle's men, a position she is hoping will allow her to influence the men toward a peaceful existence that has been all but abandoned since her aunt, the queen, was taken ill. Unfortunately the king is unduly influenced by others and the man with his ear is a war monger. Hild's dream is to slow the endless warring and the number of women among her people becoming widows. Then, in an act that surprises even her, she kills a man saving her young cousin's life. Her mother says Hild is far-minded, a gift that runs in her family. Her uncle claims she is possessed. In a bid to rid himself of her sight the king pledges Hild to the Geats who are looking for an end to a longstanding war. As a peaceweaver it is Hild's job to marry their king and work for peace between the two groups. Her uncle has other plans in mind. The journey to her new home is a trial Hild almost doesn't endure, but the choice she  must face when she arrives is even harder. Does she forsake her honor and what she knows to be right for the chance to return to her home?

Peaceweaver is historical fantasy at its best. Rebecca Barnhouse conveys the time and period of her story while weaving the mythology of the people who lived it through the plot beautifully. The details of food, clothing, etiquette, religion, class, warfare, and gender roles are depicted in vivid pictures without lengthy descriptions or explanations. The characters, even the most minor ones, become real people to the reader whose lives are important to the world as a whole.

Hild is who this story is all about though. Readers who have read The Coming of the Dragon will enjoy following her journey on the way to becoming the girl who turned out to be so important in the fate of Rune. New readers will enjoy learning where Hild's journey is taking her. All readers will enjoy the journey itself, and what it reveals of her and the world she inhabits. Hild can wield a sword well, but she doesn't try to be (nor want to be) a warrior. She uses the sword when she has no other choice and her considerable intelligence the rest of the time. In the beginning she doesn't always think completely through the consequences of her actions and she is quick to judge others and dismiss as inconsequential those she feels are beneath her.  As her circumstances continue to worsen and she is forced to overcome challenge after challenge these flaws in her character lessen, though not quickly and not entirely. Her journey makes her into the girl she needs to be to make the tough choices she has to make in the end. The decision she reaches does not come easily and is depicted realistically with all the hesitation and slightly selfish waverings any human would experience in a similar situation. It is that realism that makes her heroism so extraordinary.

Through Hild and the other women she comes in contact the reader is given a picture of what the role of women in these societies must have been like. They were not without influence, but their influence was determined by their ability to wield it well and the willingness of the men to be swayed by it. Gender roles, the imbalance of power that existed, and the unfairness of this was explored through Hild's story. When she questions what is happening to her and asks what the difference between being far minded and possessed is she gets this response from a female slave: "If a woman tells a man the gods favor him, she is far-minded. But let a woman do what the gods tell her without asking a man's permission first? Then she's possessed." This unfairness is brought into greater focus when one contemplates the idea of what a peaceweaver does. They are given to a man they don't know in order to establish a peace that often doesn't hold. While the concept of weaving peace is a beautiful one, the reality of it would have been harsh and, more often than not, tragic. Most especially tragic for the peaceweaver herself. However, Hild's story highlights that even when the circumstances that bind us are unfair and not of our choosing, we have a choices in the midst of them and those choices will show what kind of people we are.

As a fair warning I will say that there are people who might be annoyed by where the story ends (which is in the exact same spot as The Coming of the Dragon). I personally loved this aspect. This stage of Hild's journey is at an end in that moment and a new one is beginning, the same is true for Rune's story. We don't have to know for certain what would come next. If ever there was an end to a story to fuel the imagination this is it. And I like that. Though you will certainly not hear me complain if Barnhouse chooses continue Hild's and Rune's story with another book.

I read a copy of this book most joyously received from the publisher via NetGalley. Peaceweaver will be in stores Tuesday, March 27.