March 11, 2012
How much do you know about African American women serving in the Women's Army Corp during World War II? Or really the Women's Army Corp in general? I'm not going to lie despite taking two classes on the second world war in college my knowledge of both is pretty slim. In Mare's War Tanita Davis has given us a peak inside this small part of the fighting force and woven it into a greater story of family and relationship. 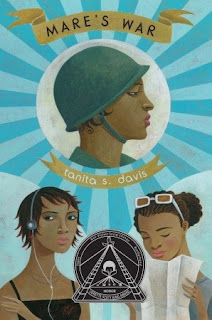 Synopsis (from Goodreads):
Octavia and Tali are dreading the road trip their parents are forcing them to take with their grandmother over the summer. After all, Mare isn’t your typical grandmother. She drives a red sports car, wears stiletto shoes, flippy wigs, and push-up bras, and insists that she’s too young to be called Grandma. But somewhere on the road, Octavia and Tali discover there’s more to Mare than what you see. She was once a willful teenager who escaped her less-than-perfect life in the deep South and lied about her age to join the African American battalion of the Women’s Army Corps during World War II.

The story is told in alternating points of view jumping from present to past. The present parts are first person from the voice of Octavia and the past are first person from the voice of Mare.  The contrast between the two tells as great a story as the past glimpses into army life for African American women during the war. Octavia and Tali live a far easier life, this side of the civil rights movement, and the Great Depression. Their grandmother frequently tells them they are spoiled and listening to her story they begin to see why she would think so. The themes of family, relationships, generational conflict, and disdain for our own history are all explored through the contrast. While a very interesting story could have been told through the WWII era bits alone, a greater and far more interesting one is told combining the two.


I enjoyed all three characters, their different personalities, and journeys. It is clear that Tali is very much like her grandmother, Mare, in personality but they have been shaped differently by the circumstances in their lives. Mare is most definitely the star of this book as she appears in both sections and putting the details of her current life we are given with the story from the past is fascinating. Octavia was a more difficult character for me to see fully and she felt more like a vehicle for telling the story of modern day Mare and her sister.


This is a slow paced book, a book more about the journey than the destination, but it is an engrossing read. The history is fascinating. I particularly enjoyed the parts in Europe and the comparison between how the women were treated there and here. The modern parts are amusing and I can see modern day teens definitely relating to Tali and Octavia.