March 05, 2012
Hannah's Winter by Kierin  Meehan was recommended to me by Charlotte of Charlotte's Library.  Thanks Charlotte! I might otherwise never known of its existence, which would have been incredibly sad. I really liked this book, but acknowledge it may not be for the enjoyment of everyone. It is a book that, in the hands of the right reader, will work magic. I happened to be one of those readers. 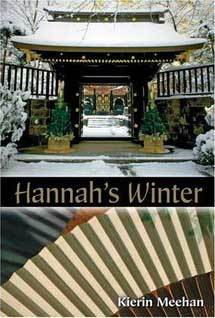 Hannah would much rather be back in Australia, starting high school with her friends. But Japan turns out to be nothing like she d imagined, and when Hannah and her new friend Miki find an ancient message in the stationery shop, they are drawn into solving a mysterious riddle. Why do the beans go berserk during the bean-throwing festival? Who is the evil-eyed woman at Sarumaru Shrine? Why is Hannah attacked by flying donuts? Is the ocean boy really trying to tell her something?

Hannah's Winter is a slow journey. Much of the book is spent getting to know the small Japanese city she is now calling home, a mix of historic and modern. It is only by the time we know Hannah, her companions, and the city well that the fantastic elements are introduced. Spirits are unsettled and it seems Hannah is the one who can settle them. Her quest takes her to many interesting places and she meets many interesting people. Hannah and her friends, Miki and Hiro, are definitely the most interesting. I was struck by how genuine Hannah's voice was. She sounds exactly like a smart 12 year old., and equal combination of assured opinions and fear of the unknown. (Her descriptions and opinion of her mother are particularly funny, and while she mocks her greatly she also loves her well.)


Honestly though  I think my favorite part of this book might be its utter lack of Americaness. Yes, it is about a foreigner in Japan, but not an American one. She is Australian and she speaks fluent Japanese. She learned it at school. One interesting insight I have gained reading all the Australian authors I have been reading of late is that there are a lot of similarities between American and Australian mindsets, culture, and worldviews. There is an overwhelming an interesting contrast too though. The contrast that comes from a context half a world away. It's fascinating and it works favorably for this book. Readers will gain an interesting look at a foreign country and culture, but it never seems too foreign because for Hannah it's not.


If you are interested in books about other places and people or books with modern fantasy, and don't mind slow journeys, I highly recommend this. I would say that despite the description's mention that Hannah will be starting high school this is definitely a MG book. That means something different in Australia than in the US. In Australia, depending on where you live, HS starts in year 7 or 8. Hannah  is only 12.


Note on Content: Some religious parents might find the spiritual elements of this book concerning. It does open the door for interesting discussions on the belief systems of different people in cultures, but you should know this element is there.